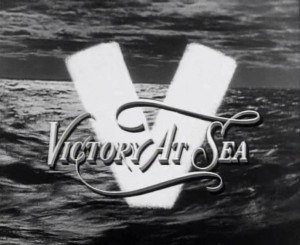 In 1951, the researcher Henry Solomon approached his classmate Robert Sarnoff, a rising executive at NBC television, about the phenomenal amount of film that each side in the Second World War had in their stocks. Solomon has been working with historian Samuel Eliot Morison who was then writing the 15-volume History of United States Naval Operations in World War II. Morison, with the approval of President Roosevelt and the Secretary of the Navy, had been working on the monumental work since his appointment in May 1942.

Solomon had his project approved by NBC in 1951 and from the naval archives around the world assembled some 60 million feet of film; this was edited down to a mere 61,000 feet for the initial 26-part broadcast. Of interest us is that Solomon signed Broadway composer Richard Rodgers (recent shows included Oklahoma! (1943), Carousel (1945), and South Pacific (1949) to write the music. He responded with 12 short piano themes, none longer than 2 minutes. The composer and arranger Robert Russell Bennet took those brief themes and created the full “13-hour score” for the 26-part television series.

As one of the first compilation documentaries, Victory at Sea set a milestone in television programming. The music for the series was issued in 4 different album versions and remains available for sale 60 years later on iTunes and ClassicsOnline. What we can see / hear in the documentary is how often the music carried the story – often there’s no narration or story being told verbally, but we get the full story from the music.

The footage used comes from the US Navy (who gave full access to the project recognizing what a wonderful PR piece it was) and other armed forces units, the Japanese and German armed forces, and many other international sources. 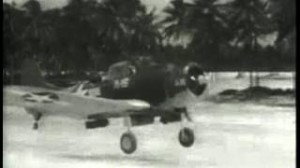 If we start just with the opening credits, with the rolling sunlit waves, the music immediately puts in the middle of the water with the swirling strings, and it is not calm seas we hear but dangerous stormy wartime seas. That’s The Song of the High Seas, and even without the video, you can sense the crashing waves and blowing fumes of water. You’ll also hear it segue into the undersea world of submarines at 00:51, with its hints of sonar.

Rodgers: Victory at Sea Suite: I. The Song of the High Seas (orch. R.R. Bennett) (RCA Victor Orchestra; Robert Russell Bennett, cond.)
When we get to Japanese footage, the sound changes. The instrumentation changes: the percussion includes gongs, pentatonic scales come to the fore, and the sound becomes much more abrupt. Watch the first minute opening credits for the Song of the High Seas discussed above and then listen to the change to ‘exotic music at 02:11:

When looking at the war in Europe and the naval action around the Mediterranean, the sound takes on an Italian tinge. After the series opening music, we have an outburst of sound like the opening of Verdi’s Otello and its storm scene. As it continues, we have hints of military music, (01:10) the Anvil Chorus (around 02:10), and other sounds familiar from opera.

One of the most beautiful melodies from the series appeared in series 10: Beneath the Southern Cross. At the beginning, however, we have an ideal example of letting music tell the story. A U-boat is meeting a supply submarine. The situation is set up by the narrator and from then on, it’s just the music that shows how the resupply happened. There’s a tension in the woodwinds and some triumph in the horns, while underneath, the story is pushed by the lower strings.

Finally, around 20:19, we get the Beneath the Southern Cross set up, at 20:38 the melody comes in – it comes in again at 23:00. The final grand version at 26:00 is used for the culmination of all the plans in this episode. But we can tell that from the music – we’ve now heard the same melody in different versions and orchestrations about 5 times.

If the melody seems familiar, then it might be because this was reused in a later Rodgers and Hammerstein musical, Me and Juliet, that hit Broadway in 1953, just when everyone would have the melody in their mind from the television documentary.

Rodgers: Me and Juliet, Act I: No Other Love (Bryn Terfel, bass-baritone; English Northern Philharmonia; Paul Daniel, cond.)
In a very 1950s sense, this is documentary as propaganda. The language is still very much about the heroic Allies and the evil Axis powers, as is to be expected with the war only being over for 7 years. The music, on the other hand, has to be considered as a separate art form. The narrator doesn’t have to tell you when a Japanese ship is on screen; the music tells you who’s winning or losing the battle. The footage, as presented, is largely without its original sound, but we can tell what’s going on anyway. Even listening without video, you can hear the imagery that Bennett put into his orchestrations: the tap-tap of Morse code signals, the swirl of the ocean, the work of the construction battalions (such as in the Guadacanal March).