Features
How You Should Feel in the Key of D major
by Maureen Buja March 18th, 2016 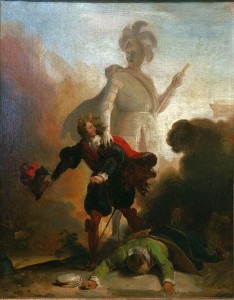 Fragonard: Don Juan and the statue of the Commander

In our earlier series on C major and minor and G major and minor, we listed Ernst Pauer’s suggestions from 1876 of pieces that fit the particular affect he assigned for a key. For the rest of the major and minor keys, he left us the attributes but not list of pieces.

Pauer’s key characteristics for D major are that it: “… expresses majesty, grandeur, pomp, and adapts itself well to triumphal processions, festival marches, and pieces in which stateliness is the prevailing feature.”

What pieces do you think should be added here? Keep in mind that the piece should date from before 1876, when Pauer’s book was published. Another guideline might be to note the relatively small list of composers he gave as examples: Haydn, Mozart, Beethoven, Mendelssohn, Schubert Rossini, Weber, and Spohr – all stalwarts of German classicism / romanticism. I suspect this list might have formed his basic repertoire in teaching at the Royal College of Music and would not have been unusual for the time. It’s interesting to note the absence of Bach and Telemann, for example – the music of that earlier generation had not yet reached the level of veneration it now holds.

I’ll make a couple of suggestions and the reasons and see what you might add to these:

Certainly has majesty and grandeur.

Beethoven: Violin Concerto in D Major, Op. 61: I. Allegro ma non troppo (Joseph Szigeti, violin; New York Philharmonic Orchestra; Bruno Walter, cond.)
This is the opening of the final scene of Don Giovanni where Leporello is preparing the feast for his master that ends so very badly. We’re supposed to be impressed with the majesty and pomp of the dinner. You might note that the little on-stage orchestra is playing little wind version of popular operas of the day, including “Non più andrai” from Mozart’s own opera, The Marriage of Figaro.

To take up the idea of a march, let’s look back to Beethoven and I suggest one of his marches, here performed on piano.

Beethoven: 3 Marches, Op. 45: No. 3 in D major (Amy and Sara Hamann, piano)
So, with Pauer’s guidelines of majesty, grandeur, pomp and all the rest of it, what are your pieces that fit his criteria?