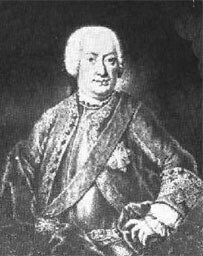 Every music lover knows the Goldberg Variations by J. S. Bach! But who was this Goldberg, who so famously lent his name to one of the most remarkable compositions in the history of Western music? The story of how this came to pass has been embellished and fictionalized, but it makes for a great story nevertheless. Johann Gottlieb Goldberg hailed from the city of Danzig, then located in Prussian territory, now part of Poland. Son of an instrument maker, young Goldberg was an exceptionally talented keyboard performer. Contemporary musicians marveled at his ability suggesting, “never there was anybody who was a stronger player, some people even call him a note-gobbler.” Mind you, they were saying these things when Goldberg was only 10 years old! This extraordinary musical talent soon attracted the attention of Hermann Karl von Keyserlingk, the Russian ambassador to Saxony. Once he entered into Kyserlingk’s services, Goldberg began to take composition lessons with Wilhelm Friedemann Bach. On Friedemann’s strong recommendations, young Goldberg went to Leipzig to study with J. S. Bach. Although Bach’s music was deemed old-fashioned at that time, he was still considered the best teacher in the world.

The great Bach biographer Nicolaus Forkel writes in 1802: “Goldberg was an exceptionally strong keyboard player, but he had no special talent for composition.” We do know that Goldberg wrote two cantatas under J. S. Bach’s supervision, and that his trio sonatas do follow in the stylistic footsteps of his esteemed teacher. Although Goldberg destroyed the majority of his compositions, two harpsichord concerti—probably written in the 1750’s—do survive. These works bear all the characteristics of his style, including “sharply contrasting themes, extreme dynamics, highly virtuoso passages, and powerful dramatic effects.” One might even be tempted to call these works visionary, particularly with the incredibly modern harmonic progressions in the slow movements. The great theorist Friedrich Wilhelm Marpurg wrote, “I hear amazing reports every day about the extraordinary capabilities of the tireless Goldberg.” But let us get back to the Goldberg Variations.

Count Kyserlingk was said to be frequently under the weather, and he also suffered from extended bouts of insomnia. To ease his torment during the dark and long hours of the night, he instructed Goldberg to play for him in the antechamber. Forkel reports, “Once the count mentioned in Bach’s presence that he would like to have some clavier pieces for Goldberg, which should be of such a smooth and somewhat lively character that he might be a little cheered up by them in his sleepless nights.” We can’t reasonably verify that Forkel described actual events, however, Bach did set to work on a composition for harpsichord featuring an aria and a set of 30 variations. It was first published in 1741 under the title “Clavier Übung,” but neither Goldberg nor Kyserlingk are mentioned on the title page. Be that as it may, Bach officially did present a copy of the first edition to Count Kyserlingk, and was rewarded with a golden goblet filled with 100 gold “Louis d’or,” a veritable fortune! It is hardly surprising that the count claimed ownership of the compositions. Apparently, during his long sleepless nights, the count could be heard giving the following instructions to his 14 year-old harpsichordist, “Dear Goldberg, do play me one of my variations.” Whether or not the count actually slept through these performances is not known, however, it remained his favorite composition. Goldberg, regrettably, did not enjoy an extended life. He died aged 29 of consumption and was buried in Dresden on 15 April 1756.