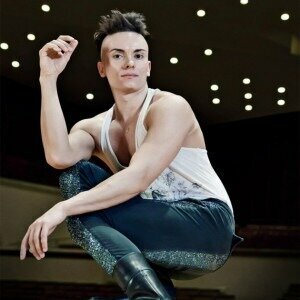 I watch his music video and am greeted with a jet black mohawk, sequinned top, and sparkly heels, flashily collaged in a rapid onslaught of fast-paced camera angles.

Did I mention he’s an organist?

Preparing for my interview with Cameron Carpenter, I was very aware of the glamorous, extroverted persona that he exudes both on stage and in his promotional videos. What I found was someone who, in person, was calm, thoughtful and incredibly articulate. His showy presentation is a far cry from an attempt at thoughtless controversy. Of his album: ‘Any album has to accept the fact of commercialism. It’s an album.’

For Carpenter, an early encounter with a picture of an organ in a children’s encyclopaedia got him hooked – the paradox being the picture of someone playing a glamorous theatre organ under the entry ‘Church Organ’. The picture was the complete opposite of what it was describing, and Carpenter says ‘It struck me – here was this man playing this fantastically glamourous thing. I wanted to do that.’

There’s no doubt that his ‘glamorous’ approach to the organ challenges its dusty, musty image – attracting a fair share of attention along the way. As far as he’s concerned, Carpenter believes that the pipe organ is on rocky ground.

‘When confronted with an instrument which, as we are now, is presented to the public in terms of statistics, pipes, keys, and horsepower, this is an unfortunate way of parsing anything other than an organist would actually be interested in. The end result is to keep the instrument unintelligible to the public. The International Touring Organ sidesteps the mechanical question.’

The International Touring Organ is the brainchild of Carpenter and the organ builders Marshall & Ogletree, designed to ‘redefine the digital organ as an instrument of artistic significance’, a huge (yet dismantleable) contraption capable of travelling anywhere, bringing the possibility of the same setup to any venue. 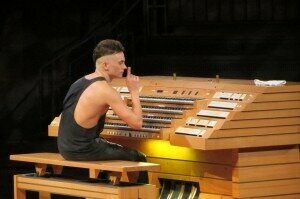 The fundamental expectation of a touring musician is, of course, to give multiple concerts in multiple venues. How is this possible when you have no idea of the instrument you’re going to encounter?

It’s true that pianists have to adapt to new instruments, but the piano as an instrument is standardised; with some organs you don’t even know how far apart the keys are going to be spaced. As Carpenter puts it: ‘The site specificity of the organ is its doom.

‘People always want to make a fuss about the ‘process’ with an artist. We don’t enjoy a relationship with an instrument in the same way as a violinist. So why do we as organists have to deal with whatever’s been thrown in there? And do organists deserve this? My answer is: yes. Nobody’s been fighting that line. Organists are happy to knuckle under and accept their role.’

Carpenter believes there is a very real problem in how the organ world is both perceived and portrayed, and this is what his International Touring Organ is aiming to revolutionise.

‘People say the organ is experiencing a renaissance, but I don’t count that as wheeling out the Saint-Saëns Organ Symphony every ten years. If you can read music, and play C major and G major, you can play the Saint-Saëns.

‘I’m resistant to saying that the digital organ is the future. The existing pipe organ isn’t the future, but the digital organ has been cheapened. The quality of many of them are laughable; the revolution is to feed the technology and declare a new standard, something that can exceed musically and architecturally what we currently have.’

This is embodied in his recent album, made with the ITO, exploring a ‘wildly varied’ repertoire, from Bernstein to Bach via Gordon Lightfoot.

And on his performance style? Again, it nourishes his belief that something has to change.

‘I’ve always had an overtly ambitious performance character. Some of my colleagues who are on broadway, or who are dancers, have the same ambition, but it’s channelled through other mediums.

‘You can see the lack of standards in our corner of classical music. This ambition isn’t there – yet you’d have a hard time taking seriously anyone in a film, or onstage in a theatre, who doesn’t have this exact ambition.’

Carmen, Variations on a theme, Bizet/Horowitz