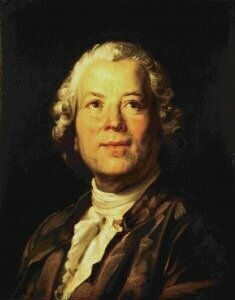 Christoph Willibald Gluck (1714-1787) was a prodigious musical talent. By age 13—entirely self-thought—he was a proficient vocalist and expert performer on the violin, cello, harpsichord, and the organ. Regrettably, his father, a successful and prosperous forester did not share his son’s interest in music, and young Gluck packed his bags and ran away from home. Apparently, he was working in Prague as a musician, but by 1734 he had made his way to Vienna. He found work as a chamber musician and met Prince Antonio Maria Melzi, who engaged Gluck as a member of his private orchestra in Milan. Once Gluck arrived in Italy, he became a student of Giovanni Battista Sammartini and four years later his first opera Artaserse, with a libretto by Pietro Metastasio, became a rousing success. A Venetian impresario quickly engaged him to compose a second opera, and Cleonice was given at the Teatro Grimano di San Samuele, quickly followed by Demofoonte produced on 26 December 1742.

Gluck’s Milanese operas securely established his reputation as a composer, and he received an invitation from Lord Middlesex, the Director of the Italian Opera in London. However, when Gluck arrived in London, England was in the grip of the Jacobite rebellion—the attempt by Charles Edward Stuart to regain the British throne for the exiled house of Stuart—and the theaters were closed. With plenty of time on his hands, Gluck performed at a number of public concerts in London, and he met George Frederick Handel. A humorous misunderstanding paved the way for a close friendship. Handel had publically stated, “Gluck knows as much about counterpoint as my cook Waltz.” Gluck perceiving an insult and called on Handel personally. Handel explained that he was referring to the singer Gustavus Waltz, who numerously performed in many of his works and was also a skilled contrapuntist. Since it all turned out to be a compliment, Handel and Gluck had a good laugh and even played together at a concert of the Society of Music in London. Eventually, Gluck did write two operas for London, but he also composed and published a number of trio sonatas.

We don’t know how long Gluck actually stayed in England, but the years 1747 and 1748 brought Gluck two highly prestigious engagements. First came a commission to produce an opera for Dresden in celebration of a royal double wedding uniting the ruling families of Bavaria and Saxony. Le nozze d’Ercole e d’Ebe was first performed on 29th June 1747 by Angelo Mingotti’s opera troupe. The opera was a rousing success and attracted the attention of the Viennese court, which hired Gluck—ahead of Johann Adolph Hasse—to compose an opera for the birthday of Empress Maria Therese and the opening of the Burgtheater. The court poet Pietro Metastasio supplied the libretto, and Gluck wrote the music for Semiramide riconosciuta. Even though Metastasio voiced his displeasure, the opera was an enormous popular success and ran a total of 27 times.

Following engagements in Hamburg, Copenhagen and Prague, Gluck was asked to write an opera for King Charles VII of Naples, featuring the famed castrato Caffarelli. Apparently, Caffarelli was so enamored with his prepubescent voice that he “desired to have himself castrated and become an eunuch.” For many critics, Caffarelli was the greatest singer Italy had ever produced. “It would be difficult to give any idea of the degree of perfection to which this singer has brought his art. All the charms and love that can make up the idea of an angelic voice, and which form the character of his, added to the finest execution, and to surprising facility and precision, exercise an enchantment over the senses and the heart, which even those least sensible to music would find it hard to resist.” Gluck was equally impressed and composed the famous aria “Se mai senti” especially for Caffarelli. He later reworked the aria for his opera Iphigénie en Tauride.

Gluck was laying the foundations for a universal operatic form that fuses elements from distinct French, Italian, and German national styles. The resulting “reform opera” was undoubtedly Gluck’s chief contribution to the culture of the Enlightenment, and we’ll explore this aspect in our next episode.