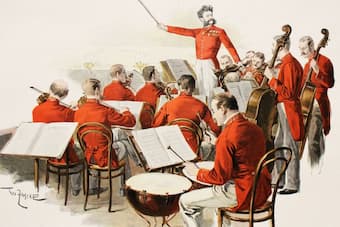 The American showman and businessman P.T. Barnum famously quipped, “Every crowd has a silver lining.” As the founder of the Barnum & Bailey Circus, an entertainment institution that ran for almost 150 years, he certainly knew how to draw in paying customers. He is also supposed to have coined the adage “There is a sucker born every minute,” referring to the process of selling tickets every night to an ever changing and relatively unsophisticated audience. Music was no exception, and composers began to write music in response to the trends of the day, which they presented at popular concerts and during theatrical events. 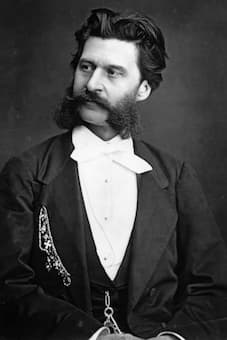 The 19th century gave rise to commercial markets for music, partly fueled by a rapidly expanding mass audience. At the age of 19, Johann Strauss Jr. was destitute. He had secretly been practicing the violin, but when his bandleader father found out, he gave him a severe beating. And when his father abandoned the family, Strauss Jr. knew he had to make money quick. So he applied to the Vienna magistrate for a license “to make music for entertainment in public resorts with an orchestra of twelve to fifteen persons.” Supposedly, the only reason he was able to garner that license was because he promised that besides dance music he would also include concert and operatic music in his programs. 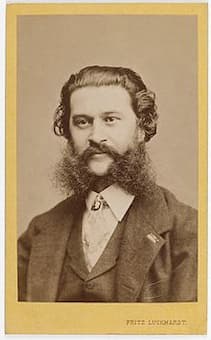 Strauss Jr. had learned from his bandleader father that imperial Vienna was caught up in a veritable dancing craze. The Viennese Waltz had evolved from a rustic country-dance to represent the pleasure-seeking and carefree sprit of the city. Of course there was much opposition from conservative groups, as the aristocracy and clergy objected to the close bodily contact between dancers. An eyewitness reports, “the men dancers held up the dresses of their partners very high so that they should not trail and be stepped on, wrapped themselves both tightly in the covering, bringing their bodies as closely together as possible, and thus whirling about went on in the most indecent positions.” Strauss Jr. went head to head with his father to provide the musical background for this vertical expression of horizontal desire. Once his father had passed away, however, Junior was able to overcome all difficulties, and merging both orchestras took his show on the road. The “new Strauss” soon mesmerized audiences throughout the continent, and in the process amassed a veritable fortune. 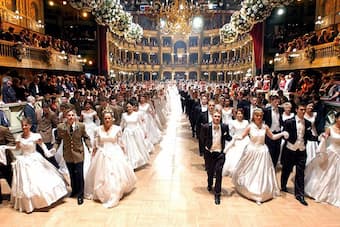 Strauss Jr. soon became the most sought-after composer of dance music in the latter half of the 19th century, and proprietors of Vienna’s major ballrooms entertainment establishments competed with one another to sign contracts with Strauss Jr. Tellingly, the band leading composer was called “the laughing Genius of Vienna.” And Strauss Jr. was laughing all the way to the bank. He could easily charge more than 35,000 US Dollars—in today’s value—for a one-time public appearance. Vienna undoubtedly couldn’t get enough of the waltz king, but it was nothing compared to the craze he inspired in Russia. Strauss Jr. spent 11 summers entertaining St. Petersburg high society at the Pavlovsk “musical train station.” He was the biggest pop star of his time. His portraits were sold in bookstores; jewelry shops carried rings and brooches with his image, and even florists offered bouquets named after his waltzes. The Strauss Jr. franchise, as might well be imagined, made astronomical amounts of money. Strauss Jr. even set off on an American adventure, when Patrick Sarsfield Gilmore, a bandmaster specializing in large-scale concerts featuring detonations and cannons invited Strauss to appear at the 1872 World’s Peace Jubilee in Boston. Strauss Jr. conducted 14 concerts and his fee for this single event, in today’s money, equaled close to 1 million US Dollars.

Performance fees, publishing contracts, arrangement licensing and franchise income made Strauss Jr. a fortune, but he had one more ace up his sleeve. He was described as “a true beachcomber of world history,” as his compositions commemorated in music any significant social, cultural, technological or political event in Vienna or the entire Habsburg Empire. We find, among countless others, the “Kaiser-Jubiläum Jubelwalzer” composed to commemorate the 40th anniversary of the accession to the throne of Emperor Franz Josef, the “Marche des Gardes à Cheval” written as a tribute to the Tsar’s bodyguard, and “The Coliseum Waltz” commemorating the gigantic building erected in the Back Bay district of Boston. There are waltzes commemorating royal weddings, the Viennese Press and even an “Electro-Magnetic Polka.” Strauss Jr. maintained this recipe of encoding current events into music for over 44 years, and his adoring public simply couldn’t get enough. Strauss Jr. had a passion for accumulating an awe-inspiring array of medals, decorations and honors from the world’s sovereigns. As such, the titles and dedicatees of his compositions, as has been suggested, “may be viewed as a musically illustrated guide to about 50 years of European history.”