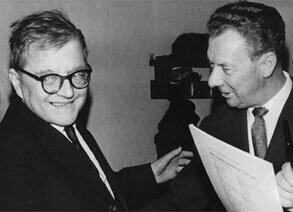 In his memoirs—supposedly related to Solomon Volkov—Dmitri Shostakovich suggests, “Fear of death may be the most intense emotion of all. I sometimes think that there is no deeper feeling. The irony lies in the fact that under the influence of that fear, people create poetry, prose and music; that is, they try to strengthen their ties with the living and increase their influence on them. How can you not fear death? I wrote a number of works reflecting my understanding of the question. The most important of them is the Fourteenth Symphony.” Actually, it was an extended stay at the Kremlin hospital in January/February 1969 that focused the composer’s creative energy. Having never properly recovered from an earlier heart attack, and in constant pain from a debilitating type of polio, Shostakovich worked rapidly and told a friend. “I wrote very fast. I was afraid something would happen to me like, for instance, my right hand would give up working altogether, or I’d suddenly go blind or something.” 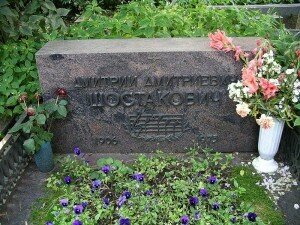 With a possible delay of the premiere performance at hand, Shostakovich wrote, “I am afraid I’ll die soon and I want to hear my work. The Fourteenth Symphony is a landmark piece for me. Everything I’ve written over the last many years has been a preparation for this work.” For Shostakovich, death was the final curtain, and not the beginning of a radiant afterlife. “Death is terrifying,” he once stated, “there is nothing beyond it.” Dedicated to Benjamin Britten, the work consists of 11 songs on poems by Lorca, Apollinaire, Küchelbecher, and Rilke, scored for soprano, bass and chamber orchestra. “I want listeners to this symphony to realize,” the composer wrote, “that life is truly beautiful. My symphony is an impassioned protest against death, a reminder to the living that they should live honestly, conscientiously, nobly, never committing a base act… Death is in store for all of us and I for one do not see any good in the end of our lives.”