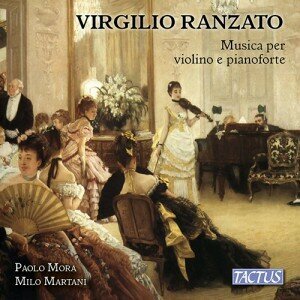 The fame enjoyed by Virgilio Ranzato, composer, concert performer and appreciated conductor, declined inexorably at the end of the Second World War when only two yet very famous operettas remained in his performed repertoire: «Cin-ci -là», and «Il paese dei campanelli». In fact Ranzato was a prolific and multifaceted musician. He composed symphonic poems, chamber and orchestra music, danceable songs, soundtracks, one opera and twenty operettas, making him one of the most central characters in the musical panorama of the early twentieth century. Paolo Mora and Milo Martani on this album address the vast repertoire the composer dedicated to the duo par excellence of chamber music: the works for violin and piano, delivering an interesting crosssection of the most interesting themes of the musical literature of the time: serenades, prayers, dances, exotic atmospheres, intimate or carefree moments flourishing thanks to the writing of Ranzato, skilfully moving between instrumental virtuosity and the pathos of the crepuscular aura of the beginning of the new century.