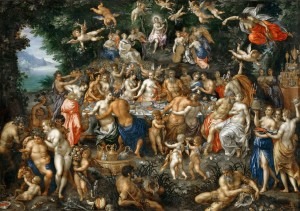 The fifteenth-century French chanson was not only a popular light vocal genre but a wonderful vehicle for all sorts of lasciviousness. In Josquin des Prez’ song “Faulte d’argent,” the anonymous poet complains that “Lack of money is unparalleled misery….,” but then goes on to note that “money will awaken a sleeping woman.” So, his problem with lack of money results in lack of a woman. Poor poet.

Josquin: Faute d’argent (Ensemble Clément Janequin )
In his wonderful chanson about birds, Clément Janequin spends equal time imitating birds and awakening sleeping lovers because the God of Love is calling that Spring has Come! The song has the lover telling his mistress to go to mass…to show off her endowments, while he goes drinking. It closes with a reference to the cuckoo, because it lays its eggs everywhere without being called. 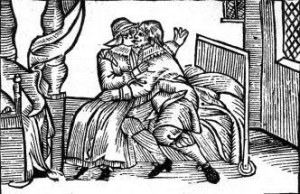 Janequin also has another little song, “Or vien ça” asking his lover Perrette to come to him to play because “your behind shall serve as a trumpet and your front shall provide the feast” and invites her “to come into a very private little room to begin the game.”

Janequin: Or vien ça (Ensemble Clément Janequin)
Clément Marot, in the poem “Tant que vivrai,” declares that “So long as I am in my prime, I shall serve the great god of love…” … “for in love there is so much pleasure.” Claudin de Sermisy’s setting takes this poem and makes a lovely song of it.

Sermisy: Tant que vivrai (Scholars of London)
A much more rural setting is Vassal’s setting of “Vray Dieu” where the poet’s merry heart caused him to lead his lady to a green sward…where he made her lovely body dance the dance of the happy hop.

Vassal: Vray Dieu (Scholars of London)
Orlando di Lasso, in “Un jeune moine” poses a very Chaucerian situation where a young monk asks a pretty young nun if she would like to “swing.” When she asks what this means, he says that, in his order, it means “two naked bodies between the sheets.” When she asks what his abbots will say, he merely replies that the abbots confuse the intoning of prayer with that which makes the bed shake and they do not hear.