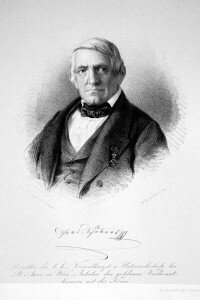 Ferdinand Lukas Schubert (1794-1859)—older brother of Franz Schubert—was a schoolteacher, organist, and composer. He had some compositional talent, but frequently asked for his brother’s help in his daily work. On occasion, he appropriated his brother’s compositions and passed them off as his own. One such instance was the Deutsches Requiem D. 621, which Ferdinand submitted under his name to the examiners for a position at the Lerchenfeld school. The ruse worked, and Ferdinand was appointed organist and choirmaster. After his brother’s untimely death, Ferdinand became the custodian of the estate of Franz Schubert. He continued to appropriate his brother’s earlier and smaller works, but with the exception of certain operas, masses, and symphonies, sold the bulk of Franz’ compositions to Anton Diabelli. We should not be too hard on Ferdinand, as he had to feed a lot of hungry mouths. His two marriages, after all, produced a total of 29 children! 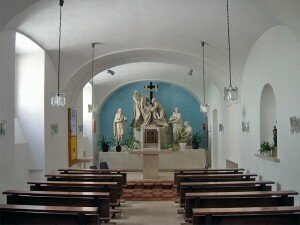 And it was Ferdinand Schubert who conducted the premiere of Franz Schubert’s C major Mass, D. 452 on 8 September 1825. The performance was part of a regular church service, and took place at St. Ulrich’s Church in Vienna’s 7th district. The original St. Ulrich chapel was consecrated in 1211, and its present appearance—a Baroque hall church with two towers—was completed in 1721. Schubert had already written his C-major Mass in June and July of 1816, and originally scored it for soprano, alto, tenor and bass soloists, four-part chorus, strings and organ. He later reworked the orchestration and added two oboes or clarinets, two trumpets and timpani. Anton Diabelli published the mass alongside a small group of liturgical works in 1825, and Schubert presumably submitted it in support of his application as Court Vice-Kapellmeister. As usual, the application came to naught, and Schubert wrote to Ferdinand, “since so worthy a man as Weigl [successor of Salieri and student of Mozart] has received it, I shall have to rest content.”