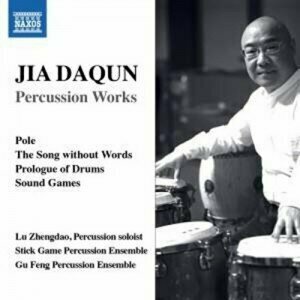 The Song without Words – II. Arias of Gong and Vibraphone

Jia: The Song without Words – II. Arias of Gong and Vibraphone

Jia Daqun is one of his country’s most internationally admired composers, whose Flavor of Bashu was named Chinese Classic Musical Composition of the 20th Century by the Chinese government. The evocative percussion works here exemplify his ability to combine a variety of musical cultures and instruments in a single work. In Pole this is achieved through the fusing of Chinese traditional percussive instruments and those from the West, whilst in The Song without Words a panoply of vivid instrumentation celebrates the quarter-century of diplomatic relations between China and Japan.