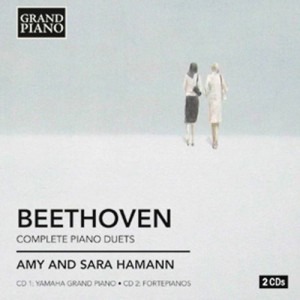 Beethoven’s compositions for piano duet embrace works written for students as well as those designed for aristocratic acquaintances and friends. This release presents two recordings of the complete works: the first (CD 1) on a modern Yamaha piano, and the second (CD 2) on chronologically accurate reproductions of the fortepianos Beethoven was composing on at the time. The modern piano was recorded in a concert hall, whereas the period instrument recording was made in a much more intimate space, showcasing the salon performance settings of the past.