In Tune Arts
Sails in the Harbor
Sydney Opera House
by Georg Predota May 27th, 2014 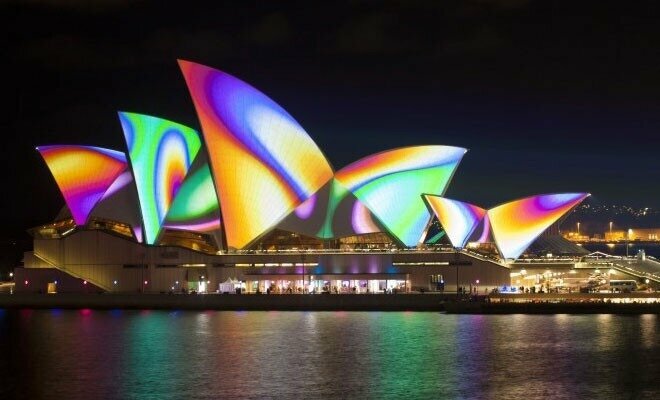 The Sydney Opera House is easily one of the most iconic and readily recognized performing arts centers in the world. Of course it’s not really a single venue, but a building complex that houses multiple performance spaces. It plays host to roughly 2000 performances, conferences, ceremonies and social functions each year that attract 1.2 million visitors. Its reason for being built in the first place, however, was simply a lack of space at Sydney Town Hall. Unable to present large theatrical productions, the city needed a dedicated opera house. To that end, an international design competition was launched on 13 September 1955, and the committee accepted 233 proposals. 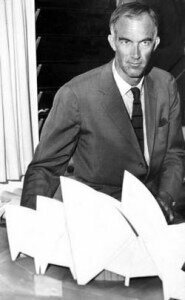 By 1957, the Danish architect Jørn Oberg Utzon was declared the winner and received 5,000 pounds for his winning design. The assessors report stated: “The drawings submitted for this scheme are simple to the point of being diagrammatic. Nevertheless, as we have returned again and again to the study of these drawings, we are convinced that they present a concept of an Opera House, which is capable of becoming one of the great buildings of the world.” Utzon’s spectacular design called for a series of shells—actually various sections of a sphere—to form the roof of the structure. The relative scale of the shells was chosen to reflect the internal height requirements of the Concert Hall and the Joan Sutherland Theatre, respectively. Smaller groups of shells, in turn, are located above the Bennelong Restaurant. The entire complex rests on a large podium surrounded by open public spaces.

By 1959, although final structural designs had not yet been completed, roughly 10,000 workers started construction on Bennelong Point. Two years later the project was 47 weeks behind schedule. The construction of the Shells proofed particularly challenging, but with the aid of early computers, initial difficulties were eventually overcome. After a new Liberal government came to power 1966, jurisdiction of the project moved to the Ministry of Public Works. Citing delays and cost overruns the ministry refused to pay for Utzon’s services, and the architect resigned. He famously described the situation as “Malice in Blunderland.” Utzon was partially reinstated only in 1999, when he was appointed design consultant for future work.

In 1966, a number of alternate architects were hired, and quickly introduced significant changes to Utzon’s original design. The Opera House was formally completed in 1973, 10 years behind schedule and fourteen times over budget. Queen Elizabeth II officially opened the Sydney Opera House on 20 October 1973, and the Sydney Symphony Orchestra performed the 9th Symphony by Ludwig van Beethoven. Several months prior to the official regal opening, the Opera House had undergone a series of test performances. Two short operas by Australian composers Larry Sitsky and James Penberthy were performed for a small invited audience at the beginning of July 1973, and followed at the end of the month by the first public performance, a production of Prokofiev’s opera War and Peace. The Concert Hall meanwhile featured an all-Wagner program, and the theatre season started on October 3rd with Shakespeare’s Richard III. Since then, the Sydney Opera House has played host to every significant performer/ensemble/orchestra/production under the sun. In 2007 the Sydney Opera House was formally placed on the UNESCO World Heritage List, sharing the spotlight with the Great Wall of China, the Pyramids of Egypt and the Taj Mahal! The famed architect Louis Kahn—one of the great master builders of the Twentieth Century—once said, “The sun did not know how beautiful its light was, until it was reflected off the Sydney Opera House.”

Sergei Prokofiev: War and Peace
Overture
Scene 1: The radiance of the sky in spring … (Prince Andrey)