Composers Anecdotes
Pomp and Circumflex
by Maureen Buja May 28th, 2014 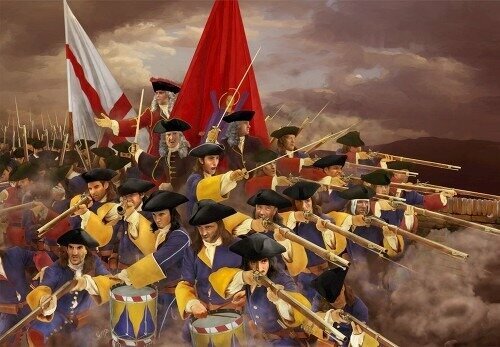 We’ve looked at English ceremonial music – now let’s cross La Manche and look at French music of the same kind. A king such as King Louis XIV and centrality of the court at Versailles meant that there was the need for ceremonial music to welcome the king and any of his visitors. He had his court violinists, his court trumpeters, and, of course, his court composers. Jean-Baptiste Lully (1632-1687) was at the court, Marc-Antoine Charpentier (1643-1704) was active in Paris, and André Danican Philidor (1726-1795) was active at the court, performing in Lully’s operas and acting as court music librarian before becoming a composer in his own right. Each contributed to creating the fanfares and marches that became the sound of the French court.

The forces are minimal: trumpets and drums. The pairing of the two instruments began on the battle field, where the drums would provide the marching step or send the signals for the army’s action; the trumpets were also used for their signaling capabilities. Yet, at the times when a nation wasn’t at war, its trumpets and drums still had a role in society, signaling the closing of the town gates, or for ceremonial occasions. Loud as they are, trumpets and drums are always able to get peoples’ attention.

The trumpet of the seventeenth century was a simple unadorned tube.

Keys for trumpets did not come until the 19th century. The length of the tube indicated the key that the trumpet could play in, so once the trumpets came indoors and had to play with other instruments, in other keys, it was necessary to change the tube lengths to make a trumpet longer or shorter, as necessary. 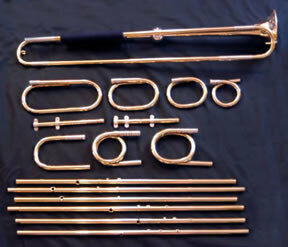 For his Marche des Nations de Flore, Jean-Baptist Lully used massed trumpets and drums to create a simple march for a ballet – this isn’t martial but rather statelier.

It was common in Lully’s works that the King himself might take a part, usually as a god descending in a heavenly chariot to dispense his judgment and wisdom to solve the conundrums of the opera. And so, with excited trumpets alternating with more melodic ideas, Mars descends to the stage.

In his two pieces from the late 17th century, Marc-Antoine Charpentier captured the essence of the trumpet in his ‘Bruit de Trompettes’. Simple and short, the ‘noise of trumpets’ can be heard to be much more delicate than we found in Lully.

André Danican Philidor took the idea of the noise of trumpets and transformed it into the Noise of War (Bruit de Guerre). The drums beat solidly through while the trumpets sound above, urging the troops onward. This piece would have been written for a military ceremony, rather than for war, but the idea of the trumpets and drums as the Noise of War remains.