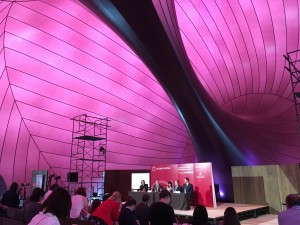 As the year approaches its end, it’s customary for the press to list their most impressive musical moments of the year. An old cliché as it may seem, a round up nevertheless offers an insightful glimpse into the chaotic and sometimes clueless part of the industry. The world itself is probably more chaotic and clueless than ever before. The rise of nationalism and far right in Europe and East Asia, the Brexit and a Donald Trump presidency all signalled new challenges of an ever-changing society where artists can by no means stay away.

Whatever happens, music remains the remedy, the unity and the salvation, if not the solution. The Ark Nova says it all. Conceived by the Lucerne Festival and developed in partnership with Kajimoto in Japan, the world’s first inflatable concert hall was built in 2013 to deliver music and hope to the victims of the devastating earthquake, tsunami and nuclear disaster in Eastern Japan. No stranger to it, I was in awe at seeing it for the first time in Tokyo in October.

I am blessed with the privilege of being a music journalist. Travelling around Asia and Europe, I had fond memories of the musical highlights I experienced. Here are my picks.

I began the year with a trip to Malta and Sicily for winter holiday. While in Rome for my connecting flight to Valletta, I decided to stay for a few more days in order to explore the eternal city as any first timer would do. By coincidence and sheer luck, I checked into Cosi fan tutte. There I spotted a name I had never picked up: Speranza Scappucci. In the following month I again came across her at the Vienna Opernball where she stepped in for Semyon Bychkov. It was a pity I missed her in Shanghai where she conducted the China debut of Jonas Kaufmann. 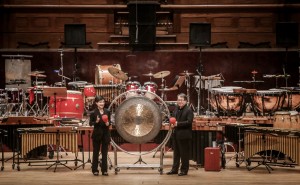 Festival of the Cherry Blossom

April is the cherry blossom season in Tokyo. One of the best viewing experiences comes from the Ueno Park. Located in the northeastern part of the Tokyo metropolitan, Ueno Park is the seat of a national arts academy, at least six museums, a zoo, a pond, an outdoor concert stage, a major concert hall and a prestigious music festival.

Although orchestral concerts and operas were staged at the Tokyo Bunka Kaikan, the Spring Festival in Tokyo -Tokyo Opera Nomori’s chamber music series took place in virtually every corner of the Park’s vicinity. One absolute highlight was the concert at the museums where listeners can enter at night and access quarters normally closed to the public.

A night at the museum indeed, not a thriller but full of fun.

The Ninth Taiwan International Percussion Convention was an eye-opener. I never imagined that percussion could have such an enormous following had I not seen it myself. Concerts were packed with an eager audience. TIPC merchandises were among the most sought after gifts during that week in May.

The thriving scene is the result of the single handed effort of Ju Tzong-ching (朱宗慶), Taiwan’s best known music celebrity, founder of the TIPC and now President of NPAC, its highest performing arts institute. At the TIPC opening concert, children with disabilities played drums and marimbas conducted by a senior member of the Ju Percussion Group which hosted the convention. The triennial event is hailed as an international percussion bonanza. 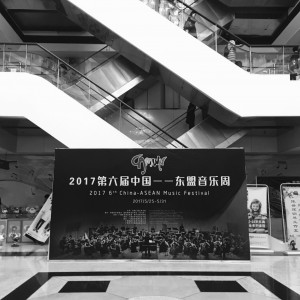 Within 6 days from May 27 to June 1 the 6th edition of the China-ASEAN Music Week, presented by Guangxi Arts University, has staged over 180 new works written by 173 composers from 21 countries in 20 concerts, performed by 230 musicians from 19 visiting ensembles. 80 composers including 20 visiting were present at the festival in Nanning. I have never seen such a crowded contemporary music festival, brimming with youthful zeal and positive energy that makes it look like a department store. It was an irresistible mess. 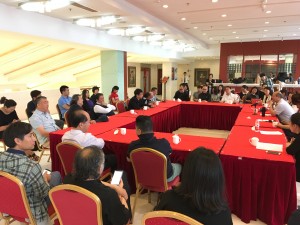 Born in 1917, Li Delun (李德倫) is viewed by many as the father figure of Chinese conductors. In order to celebrate his centennial, the China National Symphony Orchestra where Li used to be a resident conductor threw a rare party. Nine leading conductors who would call Li both an inspiration and a tutor conducted the CNSO in one single concert on June 6th at the National Centre for the Performing Arts in Beijing. They were Muhai Tang (湯沐海), Long Yu (余隆), Li Xincao (李心草), Zhang Guoyong (張國勇), Chen Xieyang (陳燮陽), En Shao (邵恩), Yongyan Hu (胡詠言), Tan Lihua (譚利華), and Xu Dongxiao (徐東曉).

It’s like a grand final of a conducting competition where the audience serves as its ultimate jury. Not surprisingly the biggest prize goes to the orchestra. 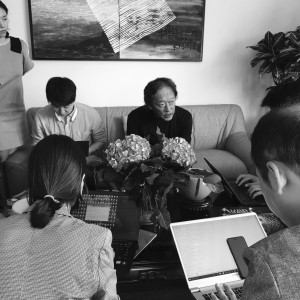 On August 18th Maestro Myung Whun Chung conducted the debut of the One Korea Orchestra, an orchestra formed with the ambition to bring musicians from both the North and South Korea in unity at the first anniversary of the Lotte Concert Hall in Seoul. I couldn’t attend the debut but had the chance to talk to the maestro and his US publicist Jacky Park in Seoul in July when Chung was awarded Commendatore Ordine al Merito della Repubblica Italiana by the Italian Ambassador to Korea. Chung’s ultimate goal is yet to be achieved following a complicated and treacherous past. Music making will be an essential ingredient in easing the escalating tension on the Korean peninsular.

If seeing is believing, then this is the moment. When I went for a leisurely stroll early October around Tokyo Midtown which was celebrating their tenth anniversary, a gigantic apple-like purple object caught my attention. As I approached, the Ark Nova revealed its full glory. As the world’s first inflatable concert hall, Ark Nova was jointly developed by the Lucerne Festival and Kajimoto. This is the first time it was installed in Tokyo in order to welcome the Tokyo residency of Lucerne Festival Orchestra under Maestro Riccardo Chailly. 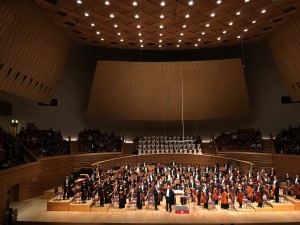 A pillar of modern music, Zhu Jian’er (朱踐耳) who would have turned 96 two days before, was displayed in full charisma with a memorial concert on October 22nd by Shanghai Symphony Orchestra conducted by Zhu’s champion Chen Xieyang. A fine selection of the composer’s best works was assembled into four parts that represented his pursuit: Heaven, Earth, Mankind, Harmony. Both the suona concerto The Heavenly Music that opened the concert and the Lantern Festival preceding the closing piece were of paramount virtuosity, sonority and splendour, radiant with authentic emotional tides towards the party of which he was a firm veteran member. The concert ended with the third movement of his Ninth Symphony: a children’s choir encapsulates his lifetime into a mesmerising lullaby.

When the Berlin Philharmonic Orchestra started its Asian tour with Sir Simon Rattle in November, they held a big variety of events in Shanghai. These included two concerts, a brass and woodwind quintet concert, masterclasses and a football match against musicians in Shanghai. The highlight was the launch of the Digital Concert Hall, Berlin Phil’s online flagship, in Chinese. The Chinese version provides encyclopedic knowledge of the orchestra’s concert archive going back to the era of Karajan. It’s a most ambitious endeavour of the orchestra to win the Chinese speaking community, an excruciatingly competitive and potential marketplace. 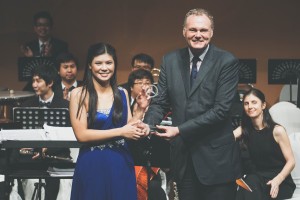 Taiwanese violinist Tsai Yu-Ping (蔡雨頻), who won the Chiangmai Ginastera International Music Festival’s competition last year but whose appearance together with the ceremony was cut short due to the death of King Rama IX of Thailand in 2016, was greeted by the enthusiastic audience in her long overdue award concert on November 18th accompanied by the Chiangmai Philharmonic Orchestra under the baton of Chaipruck Mekara at Kad Theatre. A very touching and well deserved moment.

The competition might be the only open category contest in Asia of its scale where pianists compete against flautists for sheer musicality. This year a piano duo from Hong Kong scored the grand prize: Law Wai Ting and So Wai Lung.