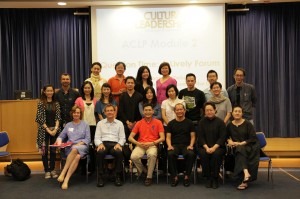 Group photo of the 3rd ACLP

I have always been called ‘an idealist’ – pursuing beauty in the world and striving for the brightest side of the human soul. Some of my friends said that it is almost impossible to achieve because nothing is perfect and one has to bow down to reality in order to survive. To certain extent, true, but I think it is still important to aim high. The word, ‘ideal’, might often be used as an excuse for people to forgive their fallacy. When some do touch upon the ‘ideal’, it is exhilarating to know that ‘ideal’ is not ‘unachievable’. Recently, I met like-minded personalities in the Advanced Cultural Leadership Program (ACLP), presented by the University of Hong Kong (HKU) and UK Clore. It is a ship taking the lead to sail towards the ideal cultural land.

ACLP is designed to provide outstanding cultural leaders with practical skills, intellectual perspectives and global networks needed to seize new opportunities, strengthen their organizations and deliver a world-class vision in order to steer the way forward and transform Hong Kong together,’ said Professor Daniel Chua, Director of the ACLP and Head of Humanities at HKU. Being the first cultural leadership program in Asia, this one-year course is composed of short and intense residential courses. Apart from bringing the world to Hong Kong, the course also takes participants to Shanghai and other cities to learn from prominent cultural institutions. I am fortunate to be awarded a WKCDA (West Kowloon Cultural District Authority) Fellowship to join the other 14 distinguished participants in this inaugural program.

Last month, I went on board for the third time; again, it was a mind-blowing experience. John Holden (Visiting Professor of City University of London), Prue Skene (Chair Free Word and Governance Associate of Clore) and Benson Puah (CEO, The Esplanade) were the three main speakers from abroad. John gave wonderful accounts on the value of culture, stakeholder mapping and on a creative approach to organizational change, whilst Prue shared her rich experience in governance as a board member and in running the Rambert Dance Company. Benson, on the other hand, talked vigorously about the challenges for the arts industry in his country and how he runs the Esplanade, a cultural complex in Singapore. 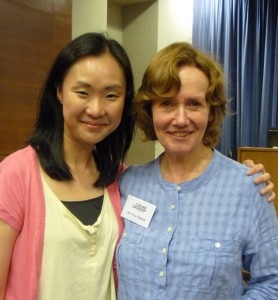 The ideas, were of course, world-class, but what I found most inspiring was the speakers themselves. Sue Hoyle from the 1st retreat mentioned about quiet leadership, before we parted, she told me to observe Prue Skene. So I did. Prue Skene was perhaps one of the most distinguished female leaders who I have ever met. Simple in her cloth, she moved with an air of elegance. She talked with a natural smile on her face with her head slightly tilting down. Her big blue eyes often sparkled with kindness, and when her gaze fell upon you, you felt that there was a ray of warmth penetrating straight to your heart. In a crowd, she was never loud, aggressive nor attention seeking, but she made herself heard with a voice of authority and clarity, and with words of wisdom. I also noticed that at some critical moments when everyone was hesitating, Prue would take the lead to act; when the discussion became heated, she would voice out to calm the argument.

Being the youngest in the group, I occasionally turned into a shrinking violet, but Prue gave me the opportunity to lead and the confidence to express my thoughts. Her behavior prompted me to ask if she was from an aristocratic family in England. To my surprise, she said that she was from a normal London family, never had a chance to enter university. She learnt on her jobs. Her willingness to learn was clear to me as she wrote down notes during other speakers’ talks, despite the fact that she is already 67 year old and has a wealth of experience of being the chair of several prominent boards and arts organizations in the UK. Talking about the role of a board, she stated firmly on what the board should or should not do, and most importantly, its member should be there because he/she wants to contribute wholeheartedly to the organization, instead of using it to gain status only. 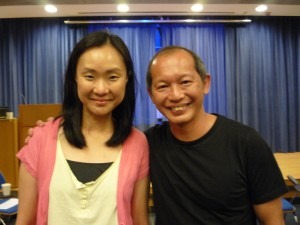 Benson Puah, the CEO of the Esplanade, left an impression on me. A ‘servant leader’, as he called himself, Benson has vision, passion and skills to lead. He manages the place in an evangelical way: with love, care, sensitivity, fairness, openness and selflessness; giving chances for his team members to shine and to take the initiative, without over-powering them or being jealous of their achievements; building up a team which, in his words, ‘would die for him and he would die for them’.
As far as I observe, it was not just a grand delivery. An accident occurred. I supposed to interview him, but my machine was broken. He waited patiently while I was checking the machine. Still broken. With guilt written all over my face, I was prepared for the usual judgmental gaze. But he did not. Instead, he asked if he could take a look at the machine. After checking it for a while, he could not fix it, so he looked up with a big smile and said, ‘It now gives you a good reason to visit me in Singapore!’I then asked if I could have a tutorial with him, he said no, because he had already promised three other participants in this time slot. I could come after them. The break was short and I thought that there would not be enough time. To my surprise, Benson came back to me after his sessions with the others, and asked if I wanted to speak with him. I am a person who rarely believes my ears, but has to observe with my own eyes. His action showed his virtue. It touched me because he was genuine.

In Chinese, we have a saying, 修身、齊家、治國、平天下; meaning one has to first be a good person, then can gradually manage from family to the world. If not, the higher you climb, the more destructive you become with the increase of power. In order to improve the cultural environment, the mindset of the people has first to be changed – less egoistic, less politics, and more open to embrace differences with love. A heart in the right place is more important than skills, which can be enriched through experiences and knowledge. Like in a music performance, the listener is touched, not by the flamboyant technique, but by the emotion and message sincerely delivered by the performer. Yes, I know it is ideal, but it does not mean that it is not achievable.