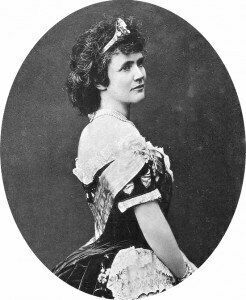 Pauline Elisabeth Ottilie Luise zu Wied (1843– 1916), the Queen of Romania as the wife of King Carol I of Romania, led her literary life as the author Carmen Sylva. She wrote across a wide number of genres, including poems, plays, novels, short stories, religious meditations, and essays. She wrote in German, Romanian, English, and French. In her youth, she had been considered as a possible bride of Albert Edward, the future Edward VII, but he married Alexandra of Denmark instead. She married Prince Carol of Romania in 1869 and she was crowned Queen of Romania in 1881.

Her poem “Der Kuss” was set by Austrian composer Wilhelm Kienzl in 1883. Her poem was based on a text in Romanian by Theodor Şerbănescu.

Kienzl: 3 Volkslieder, Op. 31: No. 2. Der Kuss (Norbert Ernst, tenor; Kristin Okerlund, piano)
Sylva’s 1880 epic poem Sappho was the source of the text for Hans Sommer’s Songs of Sappho (Sapphos Gesänge), it made Sommer’s name as a composer. Sommer brought these songs to Franz Liszt when he was attending one of his masterclasses in Weimar. Liszt said, “While the songs are certainly very dramatic, they are done with ability and taste. Carry on like that!” These songs meld the lied from the hands of Schumann with the declamatory style of Wagner. Liszt also suggested that the songs be orchestrated, thus this 1884 setting pre-dates the popularity of the orchestral lied of the 1890s.

Sapphos Gesänge, Op. 6: No. 2. Wozu soll ich reden? (Elisabeth Kulman, mezzo-soprano; Bamberg Symphony Orchestra; Sebastian Weigle, cond.)
Sylva’s collection Höhen und Tiefen (1885) was the source for “Gipfelndes Glück” which Henri Marteau set in 1923 as part of 8 Songs collection, where he set a number of different German poets (and 1 Romanian queen consort). The song is a celebration of nature, starting with a scent on the air, the sound of a bell, and the buzz of bees in a lime tree – as the sun rises, all fall silent in happiness.

Marteau: 8 Gesange, Op. 28: No. 5. Gipfelndes Glück (Vesselina Kasarova, mezzo-soprano; Galina Vracheva, piano)
Composers Julius Sachs and Georg Schumann both set her poem “Die Bitte,” which had appeared in 1885 as part of Meine Ruh. Mutter und Kind. The song is about a tired child, asking his mother to take him on her lap, and to scare him with a fairy tale.

Georg Schumann: 5 Lieder, Op. 11: No. 4. Die Bitte (Mary Nelson, soprano; Mark Ford, piano)
It’s difficult to tell from these examples how important her poetry was. The Romanian composer George Enescu set, for example, over 20 of her poems, but none have been recorded. Her 1882 collection of aphorisms, Les Pensées d’une reine was given the Prix Botta in 1888 by the Académie Française. Her works have been translated into the principal European languages and Armenian. We don’t often have queens who are also accomplished poets, so we should celebrate Queen Elisabeth of Romania for her breadth of accomplishement.