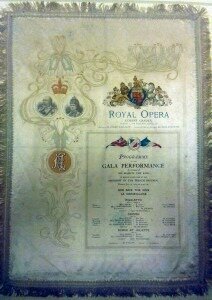 You can’t tell the players without scorecard, as the old baseball metaphor goes, and in classical music, we use the program for the same purpose – who’s singing / playing / responsible for what. In UK theatres, you still buy your program at most venues; in US theatres, they are free, unless, of course, you’re at a Broadway show and want the glitzy extra book with all the cool pictures in it.

• Programs printed on silk, generally for events of great importance, generally in the presence of royalty. 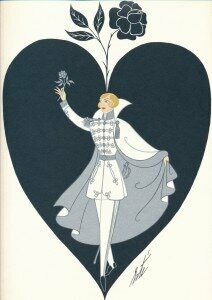 1980 cover for the Glyndebourne Opera by Erté, with the Knight of the Rose from Der Rosenkavalier

• Large-size programs for an entire season, with extensive essays on the works to be presented and complete cast lists. An example of these are the highly-collectable Glyndebourne Opera programs, with essays by noted scholars and covers by noted artists. 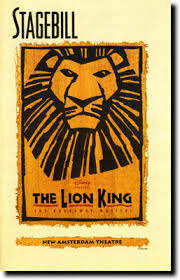 • Programs with removable center pages, such as are found at Lincoln Center, Carnegie Hall and some Broadway theatres. The outside of the book is printed in color every month, with a significant essay or two on an important new work or visiting artist, and pages for advertising, with center pages on the night’s program printed in black and white that the audience member can remove and keep apart from the rest of the book. 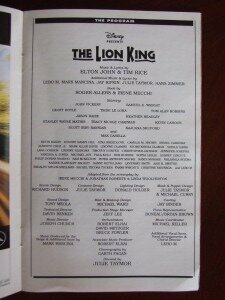 Lion King Stagebill program: inside in black and white

And, then, to help you organize your collection, you can get storage binders, specifically made for these programs. 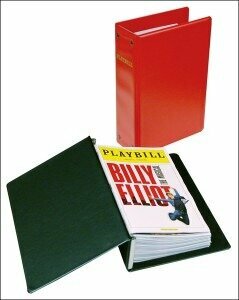 • Programs that are integral with the program for the evening interspersing information on the night’s program with advertising.
• The simplest program of all – the photocopied sheet of paper 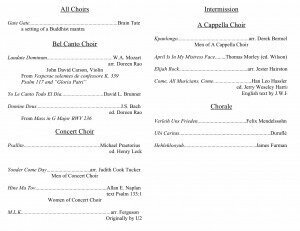 There are many many other examples – these are just of few of the ones you might run into.

Rupert Ridgewell of the British Library is behind an international project on concert programs. Though at first the project was going to index the works being performed, which would have given an unequaled overview of music in performance around the world, they have started their project simply cataloguing what programs are collected where. Some libraries have broken their collections down further, detailing what performer was in a venue on what night, such as this listing for the Manchester Free Trade Hall where you can see the Halle Orchestra in residence, with visits by Tito Gobbi, Marian Anderson, the Amadeus Quartet, and the Vienna Boys Choir, to look at 1952 alone. Dr. Ridgewell has indicated that in the library collections they’ve examined, the earliest program book dates from around 1700, but that the majority fall between 1780 and the present. The largest institutional collection is held by London’s Royal College of Music, with ca. 750,000 items. 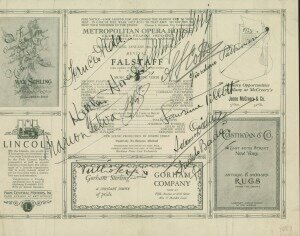 Programs are also used for signatures. This program from 2 January 1925 for Verdi’s Falstaff at the Metrpolian Opera, was signed by the entire cast, including Antonio Scotti, Beiaminio Gigli, Lucrezia Bora, and Lawrence Tibbet, singing Ford, who had literally stopped the show that night with his aria.

So, what do you do with your programs? Leave at the theatre? Bring home to throw away? Collect and preserve?