Composers Inspiration
The Pure Blood, or an Opera of Extreme Sensitivity
by Maureen Buja December 12th, 2018 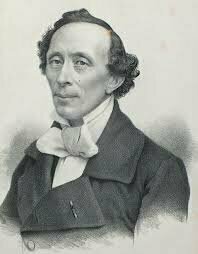 In his 1853 collection of stories for children, Danish writer Hans Christian Andersen told the story of the Princess and the Pea, or, as in his title, The Princess ON the Pea. He had first told the fairy tale, which appears to be original to him, in a small publication of 1835. He said he had heard the story as a child, but it is unknown in Denmark; there is a similar story in Sweden of ‘Princess Who Lay on Seven Peas’ but it is about a poor orphan who is able to identify the objects under her mattress (a bean, a pea, or a straw) through the aid of a sympathetic cat or dog.

The story concerns a travelling princess who seeks shelter in a castle. To test her royalty, she is given a bed of 20 mattresses and 20 featherbeds, placed upon a single pea. She cannot sleep all night because her extreme sensitivity as a royal means that she can feel the pea through all the mattresses. As a true princess, she is suitable to marry the lonely prince.

In 1927, German composer Ernst Toch took up the story in his opera Die Prinzessin auf der Erbse (The Princess and the Pea), Op. 43. This chamber opera makes the whole story personal: the King, the Chancellor, and the Secretary of State all bemoan the unmarried state of the Prince. 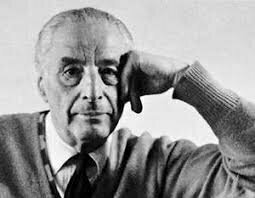 Toch: The Princess and the Pea, Op. 4: Scene 1: Ihr seht mich, Freunde, in der alten Not (Gotthold Schwarz, The King; Michael Kraus, tenor; Daniel Kirch, tenor; Deutsches Symphonie-Orchester Berlin; Marek Janowski, cond.)
The Queen, however, is concerned that the Prince marry royalty and is very worried that someone of a lower class might try to pass herself off as someone she was not. She’s concerned about a pure blood line while the King is more concerned that he marries.

The Princess appears, disheveled and tired, having been thrown out of her father’s castle by her stepmother. She is on her way to her uncle’s castle. She’s questioned by the Queen and insulted by the fact that she’s not recognized as royalty. 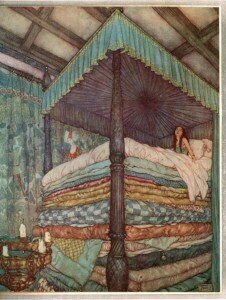 The Prince, on the other hand, is fascinated by this unknown woman. The Queen is wary and so the Chancellor and others propose ‘royalty’ tests of her taste: should they offer her inferior clothes? Inferior jewels? The Nurse suggests the Pea Test – unlike the clothes or jewel tests, the Princess will be unaware that she is being tested.

A long discussion follows about what kind of pea: not too fat, not too hard, not too soft, not too flat, and not too rough. The chosen pea is placed in the middle of the bed, under all the mattresses.

The Princess finds the room lovely, but cannot get rest in the bed – something is always pressing on her back. This bed, she thinks, is only for servants, not for me, and summons the palace in the middle of the night to fix this problem NOW. 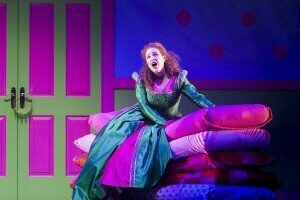 Toch: The Princess and the Pea, Op. 4: Scene 10: Ganz hubsch ist’s hier! (Silvia Weiss, The Princess; Deutsches Symphonie-Orchester Berlin; Marek Janowski, cond.)
Her shouts bring the palace to her; she cannot remain in the palace a moment longer – her ‘noble blood is too pure to put up with this’. The Prince is humiliated by the trial; his mother, on the other hand rejoices in the Princess’ demonstrated sensitivity to the pea problem. She begs the Princess’ forgiveness and the court rejoices in finding a wife for the Prince. The Princess asks rhetorically, ‘Is anyone going to ask me?’ but then says its all irrelevant and she’s happy with the situation.

Toch: The Princess and the Pea, Op. 4: Scene 11: Was ist passiert? (Gotthold Schwarz, The King; Celina Lindlsey, The Queen; Daniel Kirch, tenor; Michael Kraus, tenor; Michelle Breedt, The Nurse; RIAS Chamber Chorus; Deutsches Symphonie-Orchester Berlin; Marek Janowski, cond.)
By linking the Princess’ royalty with her pure blood, Toch and his librettist Benno Elkan place Andersen’s early 19th century story solidly in the 20th century, where concerns with heritage and inheritance through blood lines affected not only the royalty of a country but also a country’s citizens and their degrees of national loyalty. The test of the Princess is, in the end, not as innocent as it appears.