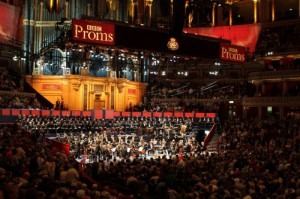 Proms. The word brings to mind memories of parties past, giggling girls, corsages and hesitant dancers. In the music world, the BBC Proms is the ultimate party: the world’s largest classical music festival with close to 90 concerts packed into 58 days. There are an astounding 250,000 tickets available. Despite this huge number, an online waiting room is necessary. Hailing from 1895, the festival is more than a tradition. It is a birthright.

The BBC Proms festival takes place each summer in the Royal Albert Hall in London. The crowd is unique. Experienced, insightful listeners, they come in droves to hear orchestras from around the world and to root for their favorites. World-class performances are held each summer in the colossal red brick, round, multi-tiered structure, accommodating over four thousand people. In front of the stage on the main floor is the arena – a large concrete circular area, devoid of seats, reserved for a special breed of concertgoers.

These aficionados, or Prommers, vie for inexpensive tickets for the privilege of standing in this area flush to the stage, close to the musicians. Their tickets can only be purchased on the day of the concert. Long queues form, sometimes many hours prior to the performance. For a particularly outstanding performer or program they will even camp out overnight. There is a camaraderie among the Prommers that includes sharing food and drinks, as well as debating the latest performance. They jockey for position. Although there are 1,400 standing positions there is no guarantee of a special spot. 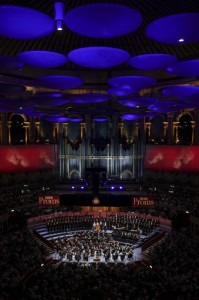 It is quite a coup for an orchestra to be invited to perform at the Proms. The list of those who have performed at the festival is a who’s who of the greatest conductors and soloists.

I have been fortunate enough to perform at the Royal Albert Hall for the Proms three times. In August of 2006, the Minnesota Orchestra played Samuel Barber’s Essay No. 1 a beautiful work, the Beethoven Piano Concerto No. 3 in C minor, Llŷr Williams, piano, followed by Mahler’s Fifth Symphony. Talk about a long program! This symphony has been called “The Everest of Music” for it’s monumental proportions and length.

The Adagietto movement is arguably the most transcendent slow movement of all time. With hushed, lush playing from the strings and harp, it is full of gentle, sighing glissandi. Although the composer himself premiered the entire symphony in 1904, the Adagietto movement was frequently performed on its own. This occurred at a Proms concert in 1909. Early 20th century programmers considered whole Mahler symphonies to be unacceptable to audiences.

Playing the work as you might imagine, is a marathon, in part due to the emotional scope of the piece. It is also an enormous physical effort requiring the utmost concentration. How on earth would the Prommers endure standing throughout? But they are a special breed.

The Barber was enthusiastically received. The piano was wheeled out for the piano concerto. One of our stage managers prepared to lift the piano lid. As the lid went up, much to his embarrassment, the rowdy and boisterous group shouted “WhOOOAAa” The concertmaster entered. She took her bow and plunked the “A” on the piano for the orchestra to tune. The Prommers applauded with merriment as if this was a momentous achievement.

After intermission we filed onstage breathing deeply in preparation for the Mahler. Would the Prommers be up to the task? No worries. During the entire work not one twitch could be observed. No fidgeting, no rustling, no whispering, no coughing, no unwrapping of candy wrappers and certainly no yawning. Their rapt attention was astounding to me.

The Minnesota Orchestra received the ultimate compliment in 2010. We were invited to play two Proms concerts. The queue of Prommers outside surrounded Royal Albert Hall.

Our French horn section was very pleased with our first program which included Barber’s Music For a Scene From Shelly followed by the Shostakovich Cello Concerto No. 1, performed by Alisa Weilerstein and the Bruckner Symphony No.4, “The Romantic”. The horns are very prominently featured in the Shostakovich and the Bruckner, which ends with a huge, rapturous brass climax. The audience leaped to their feet cheering enthusiastically.

The next night the program began with the Alban Berg violin concerto performed by Gil Shaham and the famed Beethoven Symphony No. 9 in D minor “The Choral”. The Berg is a much less accessible than the well-known Beethoven work. But I was not disappointed. The Prommers listened with thoughtful attention.

The BBC Symphony Chorus, 300 voices strong, joined us in the Beethoven. The last movement includes the famous Ode to Joy. It brought the house down. What an experience for the musicians!

Beethoven’s 9th has been played virtually every year at the Proms since 1897, one hundred and fifteen times. But don’t let that fool you. The top eight of the forty works played most often at the Proms, are by Richard Wagner. The Overture to Tannhäuser, performed 683 times, is number one on the list.

This, the 116th season of the Proms, had a record 89 concerts in the Royal Albert and Cadogan Halls totaling 313,000 attendees. Classical music? It’s alive and kicking at the Proms.

P.S. For an insider’s look at the Proms by inveterate Prommer watch Jon Jacob on You Tube.


First night at the Proms.

Last night at the Proms. It’s a party.