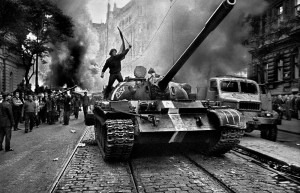 In political terms, “Prague Spring” refers to a brief period during 1968 when the government of Czechoslovakia led by Alexander Dubček was trying to lessen Moscow’s influence on the nation’s affairs. On 5 April 1968, Dubček introduced a program of reform that included significant amendments to the Czech constitution. He was looking for greater political autonomy, and for a higher degree of personal freedom. For one, farmers would have the right to form independent cooperatives, and trade unions accorded increased rights to recruit their members. Although Dubček assured Moscow that Czechoslovakia would remain in the Warsaw Pact, the Soviet leader Lenoid Brezhnev did not take kindly to this challenge to central authority. By 21 August 1968, a half million Warsaw Pact troops and tanks occupied the country. Dubček was arrested, sent to Moscow and reprogrammed. He was returned to Prague and announced that all reforms were ending. None withstanding the brevity of this democratic interlude, the nonviolent resistance of 1968 undoubtedly sowed the seeds for the peaceful transition to liberal democracy with the collapse of the Soviet Union in 1989.

Prague had already experienced a national awakening during May 1945. In 1938, Adolf Hitler occupied and annexed the Sudetenland—the border districts of Bohemia, Moravia and Silesia with a German-speaking majority—and by March 1939 all of Czechoslovakia was under control by Nazi Germany. German occupation was a period of brutal oppression, causing an estimated 136,000 deaths. The Jewish population had been virtually annihilated, and several hundred thousand Czech laborers were scattered throughout the Reich. On 9 May 1945, the Soviet Red Army marched into Prague and liberated Czechoslovakia. However, that spring was also short-lived as the Communist Party of Czechoslovakia won the parliamentary elections in 1946, and the Communists seized power in 1948. 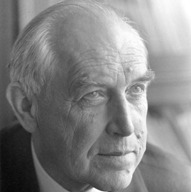 The post-war period saw not only a great deal of political jostling; it also established the “Prague Spring International Music Festival.” Designed to showcase outstanding performing artists, the festival always opens with the symphonic poem Má vlast (My Country) by Bedřich Smetana on 12 May, celebrating the anniversary of the composer’s death. In 2015, the Prague Spring Festival pays tribute to composer Jan Hanuš (1915-2004), who lived through the Nazi occupation, the totalitarian Communist years, and the period of the velvet revolution. Born in 1915, Hanuš originally studied at the Prague business academy, but on the recommendation of his piano teacher also took composition lessons at the Prague Conservatory. Active in the publishing business, Hanuš took an early interest in the works of contemporary composers and became a member of the editorial board for the Dvorák Complete Critical Edition.

Jan Hanuš: Magnificat
Although his initial compositions date from 1936, he first gained public recognition for a 1939 performance of his Meditace for piano. During the years of German occupation he composed a number of works with overtly anti-Fascist tones, including the cantata The Land Speaks in response to the execution of a number of Czech students. German censors rejected his Stabat Mater, but Hanuš celebrated the liberation in 1945 with his Hymn of Praise for soprano and orchestra. Over the next 2 decades a number of important symphonies, ballets and operas started to emerge, but following the “Prague Spring” of 1968 Hanuš was silenced by his government. Fiercely anti-Communist and devoutly religious, Hanuš barely escaped political persecution. Untamed and never silenced, Hanuš nevertheless actively pledged loyalty to his friends, and in 1965 he was made an “Artist of Merit,” and a “National Artist” in 1988. Following the velvet revolution, however, Hanuš returned all honors bestowed on him by the Communist regime. After 1989 he became a member of the Artistic Board of the “Prague Spring Festival” and on Czech National Day in 1999, Hanuš received the country’s highest award for artists from president Václav Havel. His symphonic allegro A Relay Race, Op. 63 was written in 1968 and dedicated “To the Czech Radio announcers and technicians in May of 1945 and August of 1968.” We are forever grateful that the Prague Spring Music Festival 2015 pays homage to a dedicated and devoted artist whose voice can never be silenced.

Prague Symphony Orchestra: Pietari Inkinen will perform A Relay Race by Jan Hanuš on 21 May 2015