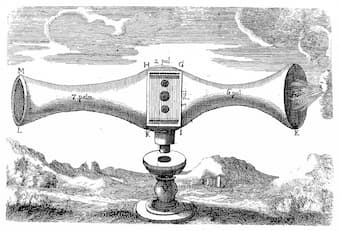 Sound comes from something vibrating, be it your vocal chords or your guitar strings. What, though, if you want to have sound without using your body? This is where the wind harp comes in.

Set in the outdoors where the winds will set the strings in motion, these wind harps, sometimes called Aeolian harps, from the name for the Greek god of wind, Aeolus, play the air that activates.

The first Aeolian harp we have recorded was written about by the German Jesuit scholar Athanasius Kircher in 1650, and this illustration of one appeared in his Phonurgia Nova of 1673. He’s made a complex machine that takes the wind in on the right and drives it across the strings in the middle and the sound emerges on the left.

Eventually, it was found that you didn’t need to have such a complex set up – simply setting some strings in tension against the wind would make them sound. 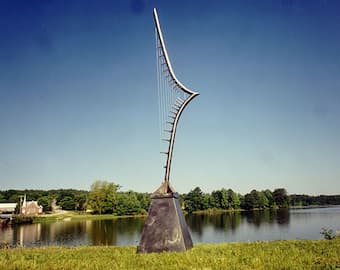 This Aeolian harp, built by University of South Carolina professor Henry Gurr, was part of an experiment that found out some fundamental properties of wind harps: because the wind, striking the strings, plays all the overtones, they cannot be tuned to be harmonious, because as you go up the overtone series, notes become dissonant with each other, and no matter what tuning you use on the harp, all harps sound the same. 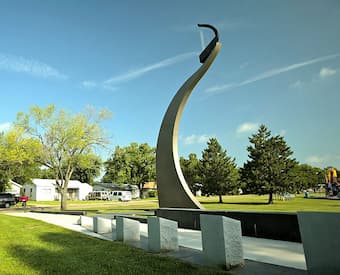 A commercial maker of wind harps has his wind harp sculptures as elements in a variety of outdoor spaces including private landscapes and gardens, at hospitals and hospice centers, memorial sites, and so on. This one is set up in Kansas at a Tornado Memorial.

In 1851, we have in the journal of American author Henry David Thoreau:

As I went under the new telegraph wire, I heard it vibrating like a harp high overhead. It was as the sound of a far-off glorious life, a supernal life, which came down to us, and vibrated the lattice-work of this life of ours. … [and later] the wind, which was conveying a message to me from heaven, dropped it on the wire of the telegraph which it vibrated as it passed.

But, this is just sound, not music. It makes something invisible audible. 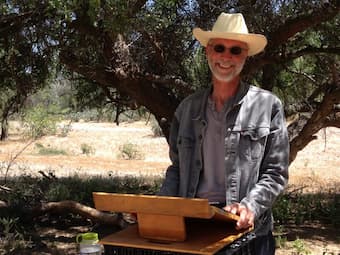 In his new album, Arctic Dreams, American composer John Luther Adams took the sound of wind harps he’d heard on the Arctic tundra and transformed the wind sound into music. By adding vocals and strings and then using electronic delay, he brought the aethereal sound of the wind harps into human range.

The first part sets the scene – an empty landscape with the wind making sound against the wind harp. The low D of the double bass sets the pitch and then he uses the first 7 odd-numbered harmonics above that D.


When the winds get more active, the music reflects that activity.


The digital delays used in the production have the effect of turning the 4 singers and 4 instrumentalists into a virtual choir and orchestral of 32 voices, with the delay creating a canonic texture. The singers either sing textless vowels or are reciting what he calls ‘Arctic Litanies,’ made up ‘of the names of Arctic places, plants, birds, weather, and seasons, in the languages of the Iñupiat and Gwich’in peoples of Alaska.’