Composers Anecdotes
From the Piano of an Opium Eater
by Georg Predota January 28th, 2016 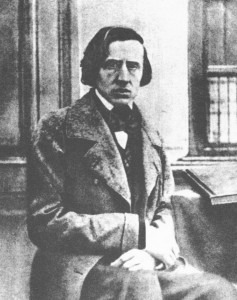 After Frédéric Chopin was seen by three physicians in Mallorca in 1838, he wrote, “…in the last three weeks, I was sick like a dog, three of the best known physicians of the whole island came to examine me… the first said that I was as good as dead, the second that I was dying, and the third that I shall die.” Chopin, like the rest of central Europe, had struggled his entire life with a tuberculosis infection. The most likely source of infection seems to have been his sister Emilia or his father, as both died from the same disease. At age 25, Chopin had started to cough blood as the first symptoms of the advanced disease manifested themselves. Over the next 10 years, the infection was temporarily kept in check, but by 1848 things had taken a turn for the worse. “…the doctors palpate around, but don’t help me…” Chopin wrote to Solange, the daughter of George Sand. “All of them agree on climate, rest and taking things easy. The rest I shall find one of these days without their help.” As we all know, Chopin died aged 39 with the autopsy revealing an enlargement of the right heart chamber due to the heart having to pump against the resistance of the diseased lungs.

To manage the agonizing effects of late-stage tuberculosis, Chopin habitually reached for opium, the one available remedy that eased his suffering and placed his mind into an exalted state of existence. Opium had reached central Europe in the 17th century, first imported from India and subsequently from Turkey. The English doctor Thomas Sydenham speedily invented a purplish concoction mixing opium and alcohol. Under the brand name “Laudanum,” it provided relief for tuberculosis sufferers and concurrently became the fashion drug of Romanticism. It was, according to Keats “a magical conspiracy between opium, tuberculosis and God.” Thomas de Quincey suggested that it intensified perceptions and disinhibited impulses, and great poets such as Coleridge attributed some of their most memorable works to the transcription of opium dreams. Keats wrote his greatest odes under the influence; Shelley’s laments, Schiller’s ballads, Novalis’s mysterious hymn and “Murger’s brilliant vignettes of Bohemian life and countless other treasures of Romantic literature,” owe their existence to opium. Sir Walter Scott, who wrote two chapters of The Bride of Lammermoor while medicating severe abdominal cramps, confessed that “he could not remember a single word of what he had written, but suggested the opium chapters to be his best.”


Rather predictably, opium also played an important role in the musical world. Hector Berlioz wrote the Symphonie fantastique in an opiate haze, and George Crabbe’s Peter Grimes was deeply opium-inspired. To ease his suffering, Chopin used laudanum drops on a spoonful of sugar on a regular basis. From his correspondence we do know that Chopin suffered from extensive hallucinations. According to an unconfirmed report by the French music critic Bernard Gavoty, “Chopin walked away from the piano in the middle of a performance because he saw strange creatures emerging from the instrument.” On a different occasion, Chopin described seeing “a cohort of phantoms, which called out for him, embraced him… and he had to push away their skeletal faces and fought under their icy hands.” Whether these hallucinations were the result of temporal lobe epilepsy—as is currently argued—or the side effect of his tuberculosis medication is still hotly debated. The fact is that Chopin composed a substantial number of works under the influence of opium. Henry T. Finck declared, “Mendelssohn in A Midsummer Night’s Dream and Weber in Oberon have given us glimpses of dreamland, but Chopin’s Nocturnes take us there bodily, and plunge us into reveries more delicious than the visions of an opium eater.” And Alexandre Dumas, a close friend and admirer of Chopin’s music, was absolutely entranced by the Berceuse written in 1844. He described it as “pure tone-color music and a source of inspiration. The human soul flees in the Berceuse to the land of dreams.”