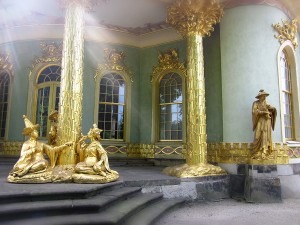 With Chinese New Year once again around the corner, let us take a quick look at the extended tradition of Western fascination with China in arts and in music. “Chinoiserie” is commonly characterized as the use of decorative Chinese motifs and concepts in Western art, porcelain, furniture, and architecture. Take a look at one small building in the Sanssouci Park in Potsdam, summer residence for the Prussian King Frederick the Great. Designed by Johann Gottfried Büring between 1755 and 1765, the garden pavilion is called the “Chinese House,” and decorated in the trendy Chinoiserie style with a mixture of rococo and Oriental design elements. Elaborate golf-leaf designs display parrots, monkeys and Buddhas, and elements of Oriental fashion—including parasols—are scattered throughout the design. It becomes immediately obvious that Chinoiserie is not merely a specified architectural or decorative style, but a complex social phenomenon. As such, it inspired all parts of Western artistic activity, including music. 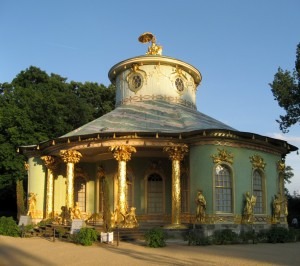 Principal visual sources of Chinese culture informed Purcell’s The Fairy Queen of 1692 and Gluck’s Le Cinesi of 1754, while Debussy’s “Rondel Chinois,” “Pagodes” from Estampes and De Falla’s vocal setting of Theophile Gautier’s poem “Chinoiserie” are principally inspired by nostalgic and utopian Chinese landscapes. The late 19th century, however, also saw the emergence of a more scholarly, anthropological approach to the Orient. Ethno-musicological studies spawned a number of important translations of Chinese legends by Friedrich Schiller, Carlo Gozzi and Hans Christian Anderson. One of the most important sources in musical terms was the free German translation of poetry by Li Bai, one of the most prominent figures in the flourishing of Chinese poetry in the Tang Dynasty. Bethge’s anthology called Die Chinesische Flöte (The Chinese Flute) is based on a French translation by Saint-Denys. Most famously, the earthly beauty and transience expressed in these verses inspired Gustav Mahler to set a number of poems to music in Das Lied von der Erde of 1909. 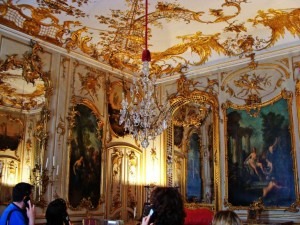 The Chinese Flute had an initial print run of 100,000 copies. Inspired by Bethge’s free versification and Mahler’s musical model, more than 180 additional composers fashioned musical settings that confronted, represented, and appropriated Chinese difference in music. Among them was Richard Strauss, who was certainly no stranger to Orientalism. His Salome of 1905 had thoroughly shocked the musical establishment, and in 1928 he finished the less celebrated Die ägyptische Helena. In the same year, he completed his Gesänge des Orients Op. 77, with texts taken from Bethge’s anthology. Ernst Toch was well respected by colleagues and peers, but not well known by the general public. His Chinese Flute, scored for 14 instruments and soprano voice dates from 1921 and at once offers captivating, alluring and highly individual music. Krzysztof Penderecki composed his Drei Chinesische Lieder for baritone and orchestra in 2008. Based on Bethge’s anthology, this cycle is unfinished as the composer plans to add more songs in due time. The Chinese Muse will undoubtedly continue to fuel the imagination of the West.

Kung Hei Fat Choi for the year of the Monkey!