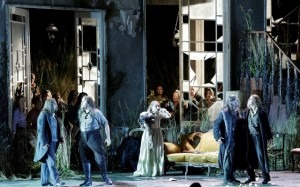 It’s hard to justify the arduous trip to Pesaro. The unremarkable town on Italy’s Adriatic coast has poor train connections, it’s a dull two hour car ride from Bologna, and the nearest airport is Ancona Falconara, a run-down and inefficient terminal boasting Ryanair as the main international carrier. The situation isn’t helped by Pesaro’s hotels which are uninspiring and hopelessly overbooked with noisy Italian families during the summer months. And yet, this coastal resort offers some of the finest opera on the European summer festival circuit. As long as you love Gioachino Rossini.

This year’s Rossini Opera Festival was opened by a new production of La Donna del Lago, an opera seria masterpiece which only recently seems to have been rediscovered (Royal Opera House Covent Garden in 2013 featuring Juan Diego Florez and Joyce di Donato; Metropolitan Opera in 2015 again with JDF and Joyce di Donato, reprising the Paul Curran 2013 version from Santa Fe). Rossini wrote this opera in a rush as a replacement for another composer, Gaspare Spontini, who had reneged on his contract to the impresario Domenico Barbaja. Based on a poem by Sir Robert Scott, the unlikely story is set in 16th century Scotland. 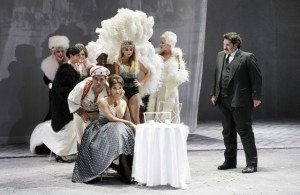 The hand of Elena, the daughter of the rebellious nobleman Douglas, has been promised to Roderigo, the rebel chief of the highlanders who has turned against King James V. But Elena is in love with Malcolm (sung by a contralto) and likely has a crush on Uberto, a stranger she has met on the lake who is none other than the Scottish king in disguise. Elena eventually marries Malcolm in a ceremony blessed by the king, who has previously dispatched Roderigo in a duel. The opera’s dramatic cohesiveness can easily fall apart if handled by a less capable director than Damiano Michieletto. The Italian directorial wunderkind infuses the opera with tension, excitement, passion, and even some sort of discernible storyline.

By book-ending the evening with scenes of an aged Elena and Malcolm, he provides a useful framework to the confusing action. Throughout the story, the miming doppelgangers of Elena and Malcolm shadow the younger and singing characters in a way that’s always thoughtful and never annoying. Michieletto’s regular stage-set partner Paolo Fantin created a landscape that is at once highland moor with weeds and the interior of a large but collapsing Scottish manor.

Pesaro served up a star studded cast that harmonized perfectly in the many ensemble scenes. Juan Diego Florez, who this year celebrates his twentieth anniversary since debuting at the Festival, delivered a flawless Uberto/King James. He boasts youthful looks with undiminished vocal flexibility, all packaged by uncompromising technical discipline. As a bel canto tenor, JDF remains in a class of his own. 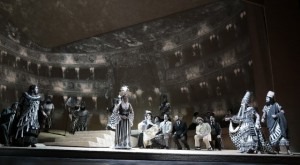 He was matched with the young Georgian soprano Salome Jicia, who only recently emerged from the Accademia Rossiniana. She is ripe for the demanding role of Elena and her lush voice possesses flexibility and strength, sparkling in the second act duet with Malcolm, and remaining robust all the way to the crowd-pleasing “Tanti Affetti” at the end of the opera. Yet she doesn’t naturally command the stage. At least not in the way that Michael Spyres does as Roderigo. Spyres possesses a remarkable vocal instrument, once sounding distinctly baritonal then effortlessly swinging to the highest notes of a lyrical tenor. Restrained he is not, but thrilling he is.

Armenian mezzo Varduhi Abrahamyan made her Pesaro debut as Malcolm, gaining thunderous applause for her creamy yet flexible voice, reminiscent of a young Marilyn Horne.

The Bologna Teatro Communale orchestra was enthusiastically whipped along by the effervescent Michele Marriotti, an outstanding Rossini conductor. No wonder: his father has been running the festival for decades.

Other performances retained the top-notch quality. Il Turco in Italia, a relatively immature and moderately successful Rossini opera buffa, featured imaginative stage sets and a prominent cast, led by Erwin Schrott as the Selim. Not a natural bel canto singer and often more of a ham than necessary, he nevertheless carried the part with conviction. Olga Peretyako was a visually and vocally stunning Fiorilla, in spite of an indisposition that made her bow out of the latter part of the Festival. ROF veteran Nicolai Alaimo demonstrated finest Italian comedic artistry with his tongue twisting and rapid-fire Italian.

The Festival also reprised Davide Livermore’s highly effective Ciro in Babylonia from 2012. In many ways a vehicle for Ewa Podles, the legendary Polish contralto plowed through the role with her astounding voice that quite simply defies description. She playfully and provocatively flips around the registers, just because she can. There’s probably no other singer around with this color and timbre, which explains her global following and the sold out houses.

She was beautifully matched by Pretty Yende, a disarmingly charming singer with stunning legati and pianissimi as well as thrilling top notes. Masterful the violin obbligato and her prayer and cabaletta “Deh! per me non v’affliggete.”

As usual, the Festival featured a wide range of Rossini-related lectures, concerts and events, easily reminding all visitors that this city lives for and from one person alone: Gioachino Rossini.