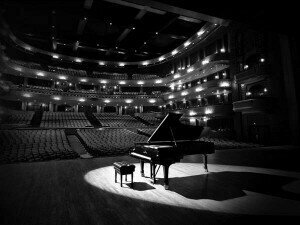 Most of us tend to focus on the things that didn’t go so well in a performance – the misplaced notes, the smudged runs, the memory slips. Analysing why these things happened and exploring solutions to problems or finding ways to “future proof” our music for the next performance are important aspects of the “practice of practising”. When a performance goes well, we might simply shrug and say “that went well” and briefly bask in the inner glow of success, the satisfaction of a job well done before moving on to the next task and preparing for another performance.

Reflection and critical self-feedback are crucial aspects of the “process” of learning and practising, and being able to pinpoint why a performance went well is as useful in the process as identifying and rectifying problem areas. Appreciating the good things and the positive feelings one experienced during a performance can also help allay feelings of anxiety. The Polish pianist Piotr Anderszewski says what he does to allay his own performance anxiety: try to recall the positive feelings of a previous performance that went well and use this to build confidence and positivity about the next performance.

Schumann: Fantasie in C major, Op. 17
Piotr Anderszewski
In early December 2017, I took part in a really delightful house concert. I had been invited to join three other pianists to play music for 2 pianos/8 hands, 6 hands and some solo works. Potentially, this was a nerve-wracking situation for me: I had given only a couple of public performances during the year and felt slightly out of practise as a performer. Added to that, I had to learn the ensemble pieces very quickly in a matter of only a week, I would be working with people whom I had not met before, on pianos I had never played before. Ok, this was not Carnegie Hall, but I wanted ensure I was well-prepared for the concert so that I did not let down the others and played to the very best of my ability.

As it turned out, the concert proved to be the best thing I have done, musically, since I returned to playing the piano seriously about 10 years ago, and the entire evening was hugely enjoyable and rewarding for all sorts of reasons. I’ve subsequently allowed myself some time for proper reflection on the performance and drew some useful conclusions about why it went well:

Choice of repertoire – I would suggest this is probably the single most important factor in a performance going well. Sometimes we are obliged to play works which don’t necessary “suit” us or for which we have, for whatever reason, had limited time to prepare. But when we perform music about which we care deeply and wish to share with the audience, and which is well-prepared then the experience of performing becomes so much easier.

Ambiance – playing a beautifully set up piano in a lovely venue can undoubtedly help make the performance go well, but even a less than perfect set up can still be transformed into a wonderful experience if we allow positive feelings from a previous successful performance to flood mind and body and inform our playing.

Audience – the very palpable sense of an audience listening and engaging with our performance, the feeling that we are fully communicating with them, and warm, generous comments after the concert all help to create a very positive concert experience.

Of course it is not always possible to have such a perfect combination of circumstances to enable a performance to go well, but we can try to go some way to recreating them each time we perform.