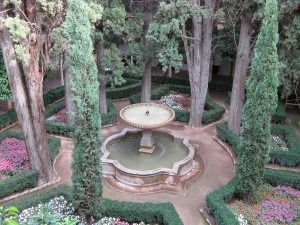 Gardens of the Generalife

Beginning with a hushed sound, Nights in the Gardens of Spain by Manuel de Falla (1876 – 1946), immediately takes us into a hot, quiet garden in an exotic location. Originally designed as a set of nocturnes for solo piano, the work developed into a work in three movements for piano and orchestra. Falla declared that the whole point of the work was to evoke ‘places, sensations, and sentiments,’ and many people consider this an impressionist work. Even though it’s for piano and orchestra, it’s not a piano concerto – the piano is part of the orchestral texture and often seems to take on the ethos of a guitar, an emblem of Spanish music.

The first movement depicts the gardens of the Generalife, near the Alhambra, in Granada, Andalusia, Spain. 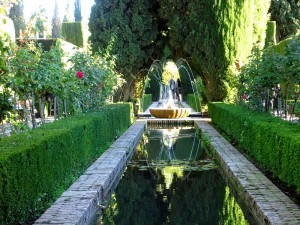 The play of sun and shadow in the Generalife gardens

Imagine yourself in this garden at night: the shadowy trees, the restrained flower beds, and the sound of the falling water of the fountain… ‘Generalife’ means the garden of the architect; this architect’s house passed into the hands of the royal family sometime in the 13th century when Arab rule governed Spain. The Generalife is located on the Cerro del Sol hill, adjacent to the Alhambra. The gardens are an example of the Arab art of gardens, where we find a series of large gardens, with each corner unveiling something new. Buildings are kept to a minimum.

Falla not only succeeds in capturing the feeling of night in his music but if you exercise your imagination, you can catch the whiff of flowers, and a sense of the past with its ghosts and allusions of power.

The second movement, Danza lejana (Distant Dance), carries us to another kind of garden. This is a triple-time Allegretto in a dance where the garden is filled with people. There are activities going on all around us, and, in a distant corner, a dancer. It’s dramatic but not happy – we feel the dance is frenetic but that the dancer is filled with a feeling of tiredness and exhaustion. 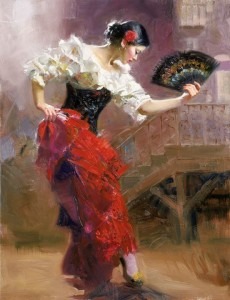 II. Danza lejana (Distant Dance)
The second movement moves immediately into the final movement, En los jardines de la Sierra de Córdoba (In the Gardens of the Sierra de Cordoba). The Sierra de Córdoba (Mountains of Cordoba) refers to the Sierra Morena mountains that rise behind the city of Córdoba in Andalusia in southern Spain. We’re not in a formal garden as in Generalife but in a gypsy encampment in the mountains. We hear from the beginning the wild evocation of a festival and it’s definitely an evening gathering. Brilliant lights and dances appear in the music and we’ve moved into the wilds.

III. En los jardines de la Sierra de Córdoba (In the Gardens of the Sierra de Cordoba)
The work closes with a yearning for an infinite night. In this innovative work for piano and orchestra, Falla has transported us to the country he loved, and shows us Spain through its gardens, dances, and, by implication, its people and its history.