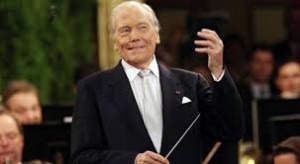 He was described as a “sound wizard and a musician with an unparalleled intensity.” And after seven decades of working with top orchestras, high-octane performers and cutting-edge composers, the French conductor Georges Prêtre has died at the age of 92. He gave his conducting debut at the Marseilles Opéra in 1946, and quickly garnered engagements at the Opéra-Comique and the Paris Opéra, the Metropolitan Opera in New York and La Scala in Milan. He led the world premiere of Francis Poulenc’s La voix humaine in 1959, and also his Sept répons des ténèbres in 1963. And let’s not forget the much-celebrated Carmen and Tosca recording with Maria Callas in 1964. In fact, Callas and Prêtre became trusted friends and frequent musical collaborators. Away from the operatic stage, Prêtre’s name will be forever linked with the 1959 world premiere of Joseph Jongen’s Symphonie Concertante for Organ and Orchestra, featuring Virgil Fox and the Paris Opera Orchestra. 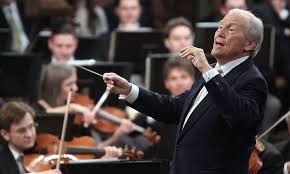 Although an outspoken champion of French music, Prêtre commanded a wide-ranging repertoire. In January 2008, he gave his highly acclaimed debut as conductor of the Vienna Philharmonic’s new year’s concert, and an invitation for a 2010 encore was quickly extended. Exceedingly rare for an artist, Prêtre received the highest decorations in France and abroad. He is Commander of the French Légion d’honneur and Chevalier des Palmes Académiques. And for his work with the Vienna Symphony, he received the Austrian Cross for Services Rendered to Science and the Arts, 1st Class, as well as the Cross of Honour of the City of Salzburg. In front of the orchestra, Prêtre was an imposing figure! Always highly expressive, his podium demeanor ranged from motionless transfiguration to highly energetic athletic outbursts. Apparently Prêtre held black belts in karate and judo, and he once jokingly suggested, “I never used it with the musicians, but it certainly intimidated them.”