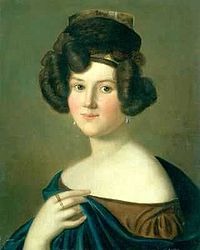 It is at least conceivable that Leah David’s rejection fueled Richard Wagner’s gradually growing hatred for the Jewish race. It is without doubt, however, that it peaked his interest in the opposite sex, specifically one that was not connected with this mother or his five sisters. He became friends with the beautiful illegitimate daughters of Count Jan Pachta, Jenny and Auguste Rayman.

When they first met, Wagner was fourteen and probably most interested in their soft fineries. Once he met them again at age nineteen, the focus had shifted slightly. He was particularly fond of Jenny, whom he described as an “ideal beauty.” According to legend, he sat beside her at the piano one evening, when he was overcome with tears. “He rushed outside and, at the sight of the evening star, found himself transported into a mysterious ecstasy.” Yet, as he recorded in his autobiography, “this glorious apparition liked cheap novels and flirting with aristocratic beaux. She is not worthy of my love.” Once Richard had secured an appointment as chorus master in Würzburg, it was only a matter of time before a member of the soprano section attracted him. Therese Ringelmann was the daughter of a gravedigger, and had a beautiful soprano voice. During the summer months Richard gave her private voice lessons, “by a method which has always remained a mystery to me ever since.” Apparently, Therese also took “mysterious lessons” in different subjects from someone else, and once her relatives pressed him for a formal engagement, Richard quickly ended the affair. Still in Würzburg, Wager fell in love with Friederike Galvani, the daughter of a mechanic. She was engaged to the oboist in the orchestra, but during a drunken party “we danced like mad through the many couples of peasants until at one moment we got so excited that, losing all self-control, we embraced each other while her real lover was playing the dance music.” The affair ended when Wagner accepted the musical directorship of the Magdeburg Theatre Company, and Friederike took her oboist back. 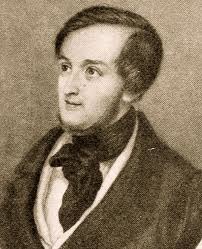 None of these relationships, however, could have prepared young Richard for the tumultuous, relentless and tortured thirty years he would subsequently spend with Minna Planer. Wilhelmina, four years Richard’s senior, had been brought up in poverty and seduced at age fifteen by a Captain in the King of Saxony’s Guard. The affair left her pregnant, and her prince quickly disappeared. She was sent to live with relatives in the country to conceal her pregnancy, and eventually pursued a career as an actress. Minna was working at the Magdeburg Theater as a junior lead when Richard came to town. “Her appearance and bearing was most striking. Looking very charming and fresh, the young actress’s general manner and movements were full of a certain majesty and grave assurance, which lent an agreeable and captivating air of dignity to her otherwise pleasant expression. Her scrupulously clean and tidy dress completed the startling effect of the unexpected encounter.” When Richard met Minna, she was engaged to Herr von Otterstadt, but he married another woman for money. Richard became completely infatuated with Minna, yet she clearly did not love him. As she wrote in a letter, “How can I resist when you are stronger than me and kiss me half to death?” Richard was proofing incessantly possessive and extremely jealous, and frequent arguments ended with Minna in tears. At long last, Minna could take it no more — and to proof Richard right — accepted the advances of some unknown gentlemen. Richard quickly retaliated by having a highly public affair with the actress Christiana Wunsch. On New Year’s Eve the leading protagonists were all invited to the same party, and Christina exploded into a jealous rage when Richard ignored her. Minna’s gentleman-friend did the same, and in the end, rather predictably, Richard and Minna celebrated the beginning of the New Year in the horizontal position. Soon thereafter, the Magdeburg Theater Company went bankrupt, Richard departed for Leipzig and Minna went to Berlin. Highly insecure, Richard did not deal particularly well with the separation and penned the following letter. “My Dear, Dear, my own unique Girl! Already more than 24 hours apart from you after I have so often treasured every minute! What will come of this? I am lost in my misery and tears, and I can find joy in nothing, nothing whatever! You have become too dear to me, I am sure of that, you dear and lovely child! How can I become accustomed so soon to our separation? How can I bear your absence? You have become part of me, and without you I feel in all my limbs as if a part of me were missing. Alas, if you felt only half my longing, then you too would be filled with love and memories. I still wept after you had gone.” Richard secretly traveled to Berlin to surprise her, but in the end was surprised to find that she had moved on to Königsberg. It’s hard to believe, Richard and Minna did get married in the end, but more about that in our next episode.