Events Reviews
One night only: I due Foscari in Aix-en-Provence
by Philip Eisenbeiss August 3rd, 2021 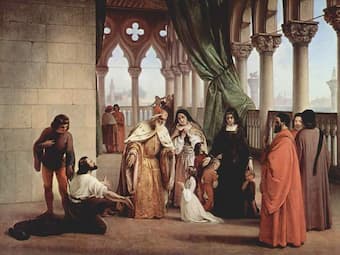 Verdi’s I Due Foscari © opera-online.com

For one night only, the Festival in Aix-en-Provence put on Verdi’s early opera, I Due Foscari. Staging this lesser known work with its unlikely story devoid of much dramatic development, the choice of a concert version was a good one. The intimacy of the singers and the music took centre stage, and in the absence of scenery, the acoustics of the Grand Théâtre de Provence were shown at their most favourable.

Performed much too rarely, the opera offers some real bravura moments for Verdian singers. It does demand, however, a great baritone to hold the performance together. And this, Aix-en-Provence definitely had. 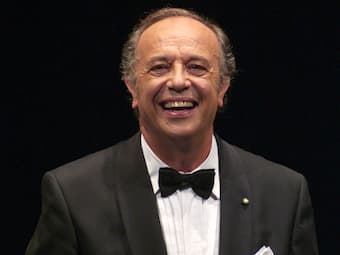 A few months short of 80, Leo Nucci still commands the stage. While the over forty years of a stellar global career have left their traces in some vocal flutter, his sonorous baritone remains forceful, he modulates impeccably and delivers beautiful, clearly intelligible Italianate phrasing. He provided a masterclass in professionalism, singing nearly all of his role without the use of a score. He was also the sole performer who even attempted to act out the role, portraying the suffering but spineless father, who as aging Doge of Venice stubbornly puts professional responsibility ahead of personal feelings, and watches his son be wrongly convicted and exiled, and ultimately stands by as he himself is ousted from his position before dying.

Verdi: I Due Foscari (Leo Nucci)

As the doddering Doge’s son Jacopo, Francesco Meli was in comfortable vocal territory. He articulated beautifully, demonstrating his unexpectedly resonant tenor, and while avoiding some of the optional top notes, he amply proved why he is one of the hardest working Italian tenors du jour.

Besides Nucci, the real star of the evening was Marina Rebeka. The young Latvian soprano has received rave reviews around the world and she didn’t disappoint. Her voice is luscious, carrying, soaring yet intimate. And she possesses an alluring stage personality, even though she clutched her Ipad more than necessary to follow the score. 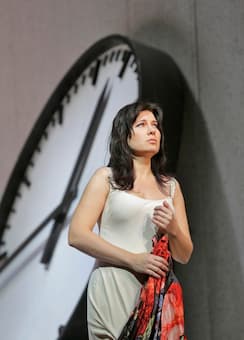 Young French bass Jean Teitgen possessed both voice and presence for the manipulative Loredano, nemesis of the Foscari family.

Daniele Rustioni was an enthusiastic and highly engaged conductor and he was clearly worth every penny, working hard to keep the Orchestra and Chorus of the Opera de Lyon and the soloists together. His enthusiasm and delight at the audience response was contagious. A second night could probably have easily sold out as well.