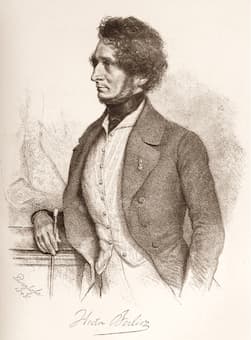 When Claude Debussy was working on his opera, Pelleas et Melisande, he wrote “Berlioz was never, properly speaking, a musician of the theater.” Debussy’s comment mirrored the thoughts of contemporary critics and scholars who suggested that Berlioz was more successful as a dramatist in his symphonies than in his stage works. “The dramatic brilliance of his orchestral writing,” according to the argument, “detracted from the theatrical effectiveness of his operas.” Initially, audiences tended to agree because the premiere of his La Damnation de Faust on 6 December 1846 at the Opéra-Comique in Paris was hardly a rousing success. The original designation as “opéra de concert” later changed to “légende dramatique” befuddled critics, and the work was given only two times with the third performance canceled. Pronounced “meaningless, vague, colorless and wholly devoid of melody, “ it was an artistic slap in the composer’s face and a financial disaster. Berlioz would later write, “Nothing in my career as an artist wounded me more deeply than this unexpected indifference.” 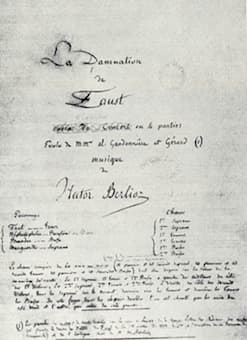 Berlioz had discovered Goethe’s Faust in Gérard de Nerval’s newly published translation in 1828. As he wrote in his memoirs, “Another of the most remarkable events of my life was the deep and wonderful impression made on my mind by Goethe’s Faust… I was fascinated by it instantly, and always carried it about with me, reading it anywhere and everywhere—at dinner, in the theatre, even in the streets… This prose translation contained a few fragments in verse, songs, hymns, and so on. I yielded to the temptation of setting them to music. I composed my score with an ease that I have very rarely experienced in my other works. I wrote it whenever and wherever I could; in carriages, on trains, on steamboats, and even in cities, despite the diverse obligations imposed on me by the concerts I had to give there.” Unsurprisingly, the idea of travel is of central importance to the work’s genesis. As the Russian critic Stasov would later suggest, “During his travels Berlioz had sensed that dream was the foremost and perhaps the only possible means of introducing movement in dramatic music. It was the task of La Damnation de Faust to exalt that promise.” 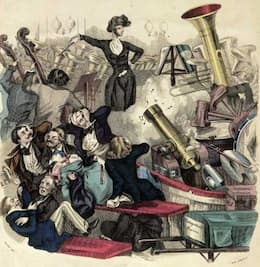 Berlioz originally composed 8 Scenes on Faust in 1828/29, and he used most of its materials for his La damnation de Faust. Following the devastating initial reception of the work in 1846, Berlioz had plans for turning “The Damnation” into an opera, because he clearly understood that only staged works had any chance of success with the Parisian public at the time. The reason why it did not become an opera, according to scholars, lay in the fact that “Berlioz was not thinking of creating a Wagnerian Gesamtkunstwerk, but thought of his composition as a musical-dramatic work that crossed and re-crossed the border between symphonic and the operatic.” Berlioz structured the scenes into four parts, “each representing not so much an act in the conventional theatrical sense as a new phase in Faust’s fatal aberration, as if everything had to begin anew each time.” As such, each part begins with hope and ends in disappointment. It is almost ironic, but La damnation de Faust was to become one of Berlioz’s most popular works in the later 19th century. 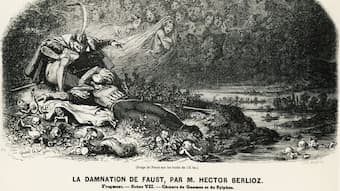 Doctor Johannes Faust, a medical practitioner who studied astrology and alchemy, including black magic, actually did live and travel throughout Germany in the 16th century. Goethe’s story and Berlioz’s adaptation explain how Mephistopheles—the servant of the prince of darkness—makes a pact with Faust for his soul. Faust will forfeit his life and loose his soul at the very moment when he is content with simply enjoying of a moment’s pleasure. Part I finds Faust in the plains of Hungary contemplating the beauty of nature and the joy of local villagers. While Faust keenly observes his surroundings, he remains deeply unhappy. Faust is back in his study in Northern Germany in Part II.

Deeply depressed, he contemplates suicide but when he hears the Easter Hymn he remembers hymn-singing choirs, which fill him with hope. Mephistopheles enters and promises Faust delights for his eyes and ears. He brings Faust to a basement bar in Leipzig, and then to the banks of the river Elbe. When they visit a fantastical garden in a dream, Faust glimpses a vision of a heavenly woman. In Part III, Faust hides in Marguerite’s room, and Mephistopheles conjures spirits to force Marguerite to love Faust. Marguerite discovers Faust, and they sing a love duet. Mephistopheles informs them that Marguerite’s mother has learned of the affair, and Faust flees. Faust finds solace in nature in Part IV. Mephistopheles tells him that Marguerite has accidentally poisoned her mother with Faust’s sleeping potion, and that she will be hanged. To save Marguerite, Faust gives his soul to Mephistopheles. Faust goes straight to hell, and angels welcome Marguerite to heaven.