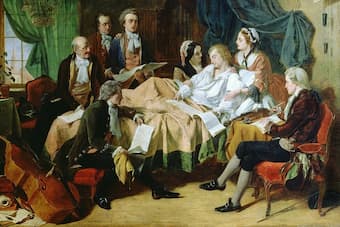 At 12:55 am on 5 December 1791, the singular and unique Wolfgang Amadeus Mozart took his last breath. He had fallen ill in Prague in September 1791, but continued his professional activities, including conducting the premiere of The Magic Flute on 10 September. His health continued to deteriorate, and by the end of November he became bedridden while suffering from swelling, pain, and vomiting. Two leading Viennese doctors, Closset and Sallaba, attended to Mozart health, and he was nursed by his wife Constanze and her youngest sister Sophie. Mozart’s condition seemingly improved on 3 December, and his friends Schack, Hofer and the bass F.X. Gerl visited him the next day to sing some parts of the unfinished Requiem. A scholar tells us “at that time, he had completed only the ‘Requiem aeternam’ in its entirety; from the Kyrie to the ‘Confutatis,’ only the vocal parts and basso continuo were fully written out. At the ‘Lacrimosa’ only the first eight bars are present for the vocal parts, along with the first two bars for the violins and viola. Sketches for the remaining movements, now mostly lost, probably included vocal parts and basso continuo.” It is indeed possible that Antonio Salieri visited Mozart as well, but clearly he neither poisoned him nor was he intent on stealing the Requiem. 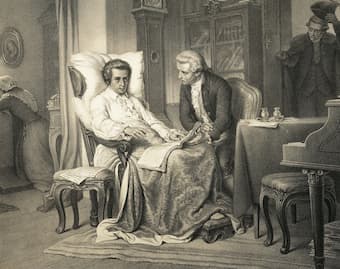 A moment from Mozart’s last days

Mozart’s condition worsened on the evening of 4 December, and Dr. Thomas Franz Closset, in accordance with the medical conventions at the time, applied cold compresses. This treatment sent Mozart into shock, and he passed away shortly before 1am on 5th December. Most of us have seen the movie Amadeus, and the scene with Salieri pestering Mozart on his deathbed. However, there is little evidence that Salieri was present during Mozart’s final hours. Mozart’s sister-in-law Sophie Heibel recorded her impressions in an 1825 letter to her brother. “I tried to control myself and went to his bedside. He immediately called me to him and said, ‘Ah, dear Sophie. How glad I am that you have come. You must stay here tonight and see me die.’ I tried hard to be brave and to persuade him to the contrary. But to all my attempts he only replied, ‘Why, I have already the taste of death on my tongue.’” Sophie left Mozart for a short time to tell her mother, and to summon a priest. She returned to find Franz Süssmayr at Mozart’s beside, apparently discussing how the Requiem should be finished. “Words fail me, dearest brother,” Sophie writes “to describe how his devoted wife in her utter misery threw herself on her knees and implored the Almighty for His aid. If it was possible to increase her sorrow, this was done on the day after that dreadful night, when crowds of people passed by and wept and wailed for him.” 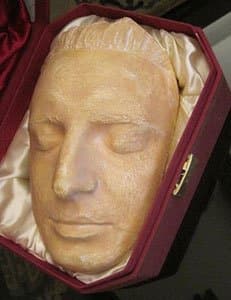 On Mozart’s death certificate we find the cause registered as “hitziges Friesel Fieber,” which is commonly translated as severe military fever. Military, in this instance, refers to a rash resembling millet seeds that manifests red bumps that blistered the skin. This symptomatic description was later turned into a diagnosis of ‘rheumatisches Entzündungsfieber’ (rheumatic inflammatory fever) on evidence given by Closset and Sallaba. Ever since, generations of doctors and researchers have been obsessed with figuring out what really caused Mozart’s death at the age of 36. Well over 100 diagnoses have been published, and this list is “almost guaranteed to expand in the years to come.” The rumors started flying barely a week after Mozart’s death, when a Berlin newspaper reported that Mozart had been poisoned to death. Mozart had actually helped to get this rumor started by suggesting to his wife at the beginning of November, that “he felt ill, was likely to die, and that he must have been poisoned.” Poison, as witnessed in paintings, opera and movies, was clearly the sexiest cause of Mozart’s death. In scientific terms, however, this theory does not hold water. 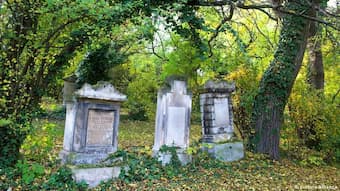 A somewhat recent epidemiological study published in 2009 looked at reports of all recorded deaths in Vienna between December 1791 and January 1792, and during corresponding periods in 1790 and 1792 to 1793. They discovered a “marked increase in the deaths of younger men in the weeks corresponding to Mozart’s illness when compared to the previous and following years.” 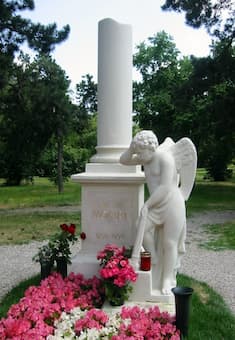 In addition, they discovered reports of an epidemic in Vienna around the time of Mozart’s death, “with many people dying with the same symptoms.” The researchers concluded that Mozart suffered from a “streptococcal infection, which virulently progressed to an acute nephritic syndrome—involving a swelling and dysfunction of the kidneys, caused by post-streptococcal glomerulonephritis.” The cause of Mozart’s death will surely be debated for decades to come, but we do know that he was buried in a common grave at St Marx Cemetery on 7 December 1791. One of the first biographies of Mozart reports, “A heavy storm of snow and rain was raging, and the few friends who had assembled for the funeral procession stood with umbrellas around the bier, which was then carried to the Cemetery of St. Marx. As the storm grew still worse, the mourners decided to turn back at the gate, so that not a friend stood by when the body was lowered into the grave.” As it turns out, this ominous weather report was the product of an imaginative mind. We know today that “the tale of a storm and snow is false; the day was calm and mild.”