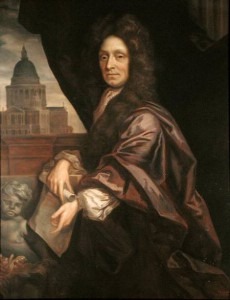 Thomas Morley: I know that my redeemer liveth

For nearly 300 years, St. Paul’s Cathedral was the tallest building on the London skyline. The present cathedral with its majestic dome was designed by Sir Christopher Wren and built in the wake of the English Reformation between 1675 and 1710. Yet it is only the fourth in a succession of buildings that have been used for worship over the last 1400 years.

In 601, Saint Mellitus arrived in Britain on a mission from Pope Gregory the Great to convert the Anglo-Saxons to Christianity. Mellitus was consecrated as the first Bishop of London in 604, and he founded St. Paul’s in the same year. Fires and Norman invaders frequently ravished the earliest Cathedral buildings, but the building began in 1087 by Bishop Maurice — the chaplain to William the Conqueror — stood for almost six hundred years. 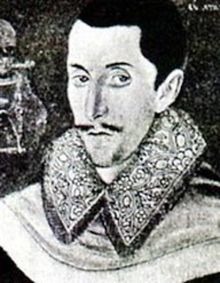 “Old St. Paul’s Cathedral” was consecrated in 1240 and featured the pointed arches, larger windows and ribbed vaulting of the Gothic building style. Enlarged in 1314, a steep spire rising to a height of 149 meters adorned the centrally placed bell tower. This largest building in medieval England was not merely used for Catholic worship, but also became a center for public activities. “The north/south route through the Cathedral transepts was used as a general thoroughfare,” ball games were played in and around the structure, and the churchyard functioned as a public trading post. A Cathedral School was established, and “Paul’s Cross” — an outdoor covered pulpit for making proclamations and speeches — was used until the 1630s.

The English Reformation — a series of events initiated by Henry VIII to break away from the authority of the Pope and the Roman Catholic Church — led to the destruction of the interior ornamentations, pictures, relics, crypts and cloisters of St. Paul’s. At one point during the English civil war, the vast nave was even used as cavalry barracks and stabled 800 horses. Music had always played a central part in the religious services of St. Paul’s, and the earliest records of a performing choir date from 1127. In the wake of the Reformation, the new Book of Common Prayer prescribed that all singing was to be done in English instead of Latin. 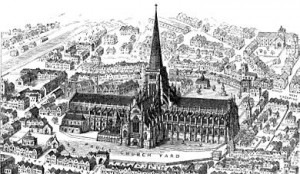 Throughout its long history, a number of distinguished musicians have served Old St. Paul’s, including Thomas Morley (1557-1602) who started his tenure as organist in 1589. A student of William Byrd, Morley initially converted to Catholicism but eventually changed allegiances and engaged in espionage work among English Catholics in the Netherlands.

While Old St. Paul’s gradually became a thriving center of Protestant culture in England, the building itself fell into a serious state of disrepair. The spire was struck by lightening in 1561, with the ensuing fire destroying the steeple and roofs. Restoration work was haphazardly initiated, but architects could not agree on how to restore the medieval structure. Christopher Wren proposed the addition of a dome, a plan adopted in August 1666. Only a week later, “The Great Fire of London” severely damaged Old St. Paul’s. Although it might have been possible to reconstruct the building, It was decided to construct a new cathedral in a modern style. I tell you more about “New St. Paul’s” in our next episode.