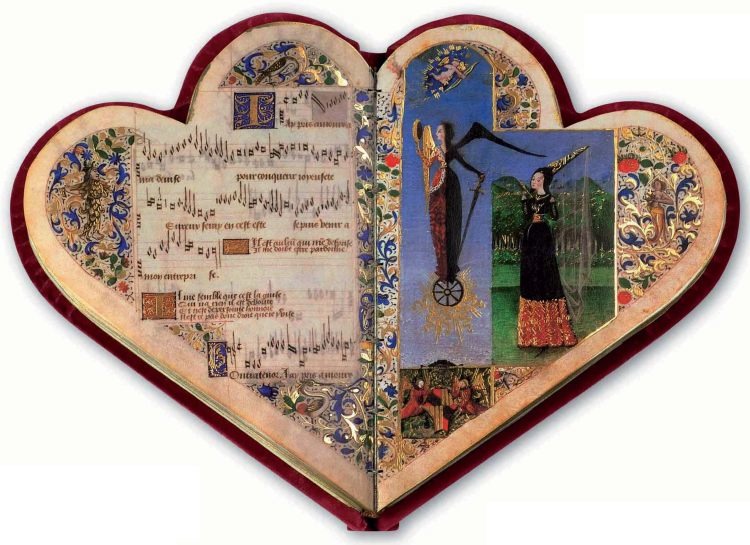 Some of the most beautiful music in the world is an image, not a sound. And in these works of musical art, there is often another message to be read.

In 1477, the Chansonnier Cordiforme (the heart-shaped songbook) was a beautiful red velvet–bound book that, when opened, took the form of a heart. The book contained both Italian and French secular songs by the greatest composers of the day including Dufay, Binchois, Busnoys, and Ockeghem. Now part of the Rothschild collection at the Bibliothèque Nationale in Paris, France, this little book has fascinated simply through its design. The songs plead for love, or at least, a kindly regard, by the poet’s intended. 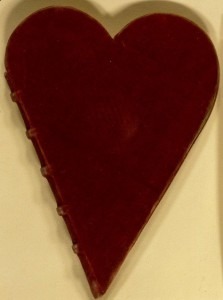 Another heart, this time a piece in the shape of a heart, was written by the French composer Baude Cordier and can be found in the Chantilly Codex. Shown here, the three-voice rondeau, ‘Belle, Bonne, Sage’, is a beautiful self-referential piece where Cordier asks his lady to accept his new song, which is within his heart. The notation, in both black and red, reflects the ‘ars subtilior’ style with its high level of rhythmic complexity. 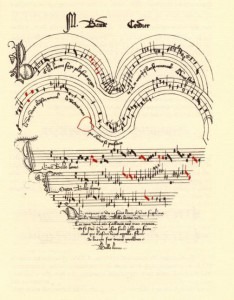 As manuscript music was replaced by printed music, this kind of hand-made aesthetic fell away and it’s not very common again until the 20th century.

Two different problems confronted modern composers: how to “score” electronic music and what were the possibilities of using graphical ideas in their scores.

For a composer such as Ligeti, who composed his electronic pieces without first creating a score, it was later artists who took the sound concepts backward to give an indication of Ligeti’s music. The graphic score below was created by Rainer Wehinger, who had to create an entire colour palette to represent the sounds already created by Ligeti. 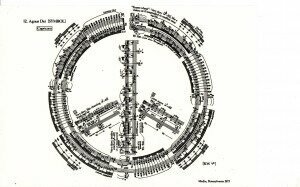 The American composer George Crumb took up the art of music for the eye in his Makrokosmos, two cycles of 12 works for amplified piano completed in 1972 and 1973. In the last piece for Makrokosmos II, No. 12. ‘Agnus dei (Capricorn)’, the piece is presented in the shape of a peace symbol. Other pieces in the cycles are written as spirals and other shapes.

Now the shape here really isn’t important – the music would sound the same way when written in score format. But the graphical shape is important – by writing the Agnus dei in this shape, he immediately calls to mind the last line of the ‘Agnus dei’ (Agnus dei, qui tollus peccata mundi, dona nobis pacem – Lamb of God, you who take away the sins of the world, grant us peace).

And so we return to the beginning – the shape of the musical score can be an additional message from the composer, be it here is my heart or let us live in peace.