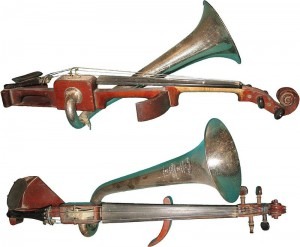 What would you think of a 1-string violin with a metal horn attached? Odd indeed! The Stroh fiddle was once such instrument. The instrument was made of mahogany with a metal horn attached to a diaphragm to make the instrument louder. This was to serve two purposes: it made the Stroh fiddle loud enough to play outdoors and it also made it loud enough to use on early recordings. If you used a regular violin for a cylinder recording, it had a thin sound. The Stroh violin with its horn restored the full violin sound. The first Stroh violins only had 1 string, but modern ones have 4 strings.

For a modern take on this, a steam-punk setting is perfect! 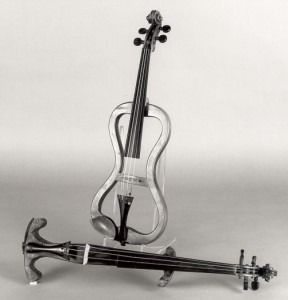 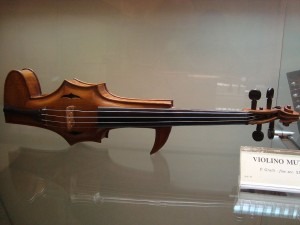 Leopold Mozart mentioned it, they’ve been around since the 18th century, but you never hear them. That’s because the function of the instrument is to be very very quiet. The mute violin is a string instrument that’s designed for practice when you don’t want to annoy the neighbors. Because it doesn’t need the soundbox that makes up the body of the instrument, a mute violin can be quite modernistic in its appearance.

One work that was written for the mute violin was Willem Pijper’s String Quartet No. 1 of 1914. In this recording, however, the quartet substituted a regular violin with a very heavy sordino on the bridge. You’ll hear how the first violin just sounds as though it’s quite distant.

Yamaha has moved the idea into the 21st century by making an electric silent violin. Until you plug it in, the violin makes no sound; at the back of the instrument, however, you can plug it into your amplifier and play as loud as you wish.

We have many instruments named after people: the Sousaphone for John Phillips Sousa, the Saxopohone for Adolphe Sax, its inventor. And then there’s the Heckelphone, invented by Wilhelm Heckel. It was created at the suggestion of Richard Wagner and appeared in 1904. It’s similar to the oboe, but pitched an octave lower.

Richard Strauss used it in his 1905 opera Salome, in Elektra, and other works. Hindemith used it in his Op. 47 trio for heckelphone, viola and piano.

The instrument was used to bring some bass weight to the woodwind section, but the instrument remains quite rare. It is estimated that only 150 heckelphones were ever made and only about 100 remain today.