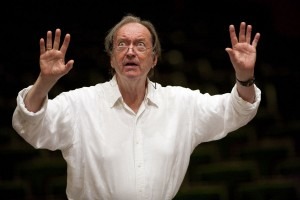 Like an enormous surgeon’s scalpel, the Second World War indiscriminately severed musical and cultural arteries. A new world order was gradually taking shape, and music became a pretty adornment to our busy little lives. Coming of age in the years immediately following this great conflict, Nikolaus Harnoncourt lamented the fact that music—one of the foundations of culture throughout European history—had been relegated to serve a purely ornamental function. While the understanding of music had always been part of a general education, it had now been reduced to the merely beautiful and thereby to what can be universally appreciated. In fact he claimed, “Anything related to an actual understanding of music had been eliminated.” So Harnoncourt, child of Austrian nobility and cellist with the Vienna Philharmonic for 17 years, decided to do something about it. For starters, together with his wife Alice, he founded the Concentus Musicus Wien, an ensemble dedicated to period-instrument performance. Over the next decades, Harnoncourt brought scholarship and the sensibility of historical performance to the mainstream repertoire “with sometimes controversial, but always illuminating results.”

Harnoncourt’s insight was the realization that music speaks to the precise moment in time when it is actually played. The music of Bach as performed at the beginning of the 20th century, for example, sounded nothing like the music Bach performed in the mid-18th century. To make Bach relevant for the 21st century, Harnoncourt consulted a number of period musical treatises and manuscripts—not to mention the use of period instruments—and re-historicized Bach’s music for modern audiences. Not content to be a mere transmitter of music, Harnoncourt essentially opened up the realm of interpretation by enriching the subjectivity of artistic interpretation with the objectivity of scholarly study. Harnoncourt was well aware that there was no way of knowing how Bach’s music sounded to Bach. As such, historical performances today are not really historical, but as Richard Taruskin pointed out, “a thin veneer of historicism clothes a performance style that is completely of our own time, and is in fact the most modern style around.” In essence, Harnoncourt turned period practice into an avenue of exploration and liberation.

The Bach cantata project, which recorded the complete sacred cantatas of J.S. Bach in collaboration with Gustav Leonhardt, took the musical community by storm. Here was Johann Sebastian, as he had never been heard before! Based on historical research, period instruments grouped into smaller ensembles. The tempos got faster and the texture rougher, and vibrato essentially disappeared from the soundscape. It also replaced female voices with those of unbroken boy trebles, even in the solo movements. Concordantly, Harnoncourt published books and articles on performing styles and period instruments while holding the academic chairs of professor of performance practice at Salzburg University and the Salzburg Mozarteum. Harnoncourt brought the same approach to modern instrumental ensembles, including the Concertgebouw and the Berlin and Vienna Philharmonics in mainstream classic and Romantic repertoire. Performances of Mozart, Beethoven, Brahms and Dvořák went back to autograph scores and early printed editions to more thoroughly understand the performance practice during the composer’s own time. Harnoncourt also ventured into operatic territory, and he certainly did not shy away from music of the 20th century. In all, Harnoncourt made more than 500 recordings, and he was at the center of a transformation that gradually erased the distinction between historical and mainstream. Above all, he moved music forward by moving it backward.