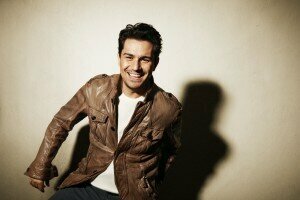 In discussing the wide-range of characters he’s sung and his current role, lyric tenor Saimir Pirgu says he likes the roles where he doesn’t die at the end, contrasting his current role of Nemorino in L’elisir d’amore at the National Theatre in Tokyo and his title role last month in Romeo and Juliet.

Albanian-born Pirgu started as a protégé of Luciano Pavarotti and by age 22, he was appearing as Ferrando in Così fan tutte. As a singer, he finds his voice continues to change and from his first roles in Mozart and Donizetti, he has now started to move onto French repertoire and, most particularly, into Verdi.

We talked about the difference in approach he took to the various roles in Verdi. He finds that in operas such as Rigoletto, where he played the Duke, it requires nearly a bel canto voice. Il Trovatore, on the other hand, requires something heavier. For a work such as the Requiem, it requires a very delicate and sophisticated sound. He was instructed by one conductor to ‘fly with the voice’ and he has found that in section such as the Dies irae’s Ingemisco, he needed a voice that was between a lyric and lyric spinto. It’s not easy for a heavy, traditional Verdi tenor to approach. The quality of brightness in the voice is much more important than power. Riccardo Muti told him ‘Put the sun in your voice.’ In the video below, ‘Ingemisco’ comes in at 31:40. 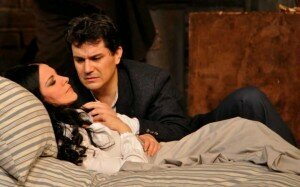 Away from Verdi, he’s also appearing this year in Beethoven’s 9th Symphony. He laughed about it, saying that he didn’t think vocal music was Beethoven’s best genre, not compared to his piano or regular symphonic repertoire. It’s an important work, but not a masterpiece. It’s often difficult for the singers because they find it difficult to hear each other – it never seems to quite work as it should. He finds Verdi’s vocal writing much more suitable for the voice.

When looking at the characters he plays, we talked about the Duke in Rigoletto. For him, the best way to play the Duke is the classic way – he’s arrogant and the bad man of the opera. He knows that ‘La donna è mobile’ is the main aria, but he appreciates productions that don’t stop everything at that point. Because of how it interrupts the action, he finds it’s often more effective to sing the aria in concert, thus avoiding the mixture of the aria (stupendous) with the character (not so admirable).

The aria’s reappearance at the end, signaling to Rigoletto that he’s failed, is one of the great dramatic shocks in opera.

One of Mr. Pirgu’s most frequent roles is Alfredo in La traviata and he finds difficulty in realizing the character fully. At one point, he asked his agent to stop scheduling it so that he could come to better grips with the character. He’s sung the role with some of the greatest sopranos of today, and is himself one of the greatest new generation Alfredo’s, but finds the 2-dimensional character difficult to perfect. He pointed out that Alfredo is never alone in the opera – he’s either with Violetta or his father Germont. Alfredo only exists in terms of the other 2 characters (versus the Duke, who has his own life), and so the audience finds it difficult to get involved with him. 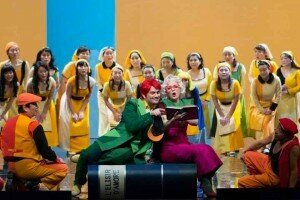 His performance last month of Romeo in Gounod’s Romeo and Juliet involved a 30-minute death scene, which was only a year after losing his own father, he found it a difficult process, even instructing his mother not to attend any of the performances. His current role as Nemorino, in which he has pink hair, would be better for her to attend, but the 14-hour trip to Tokyo is more than she wants to deal with. His declaration of ‘I prefer not to die’ was heartfelt.

In his past 17 years, Mr. Pirgu has met the difficulties of a performing career with the happiness he found in travel. He takes every opportunity to learn, be it in museums or about the nightlife. He said he’s doing everything possible to have a beautiful life and it seems he’s successful!