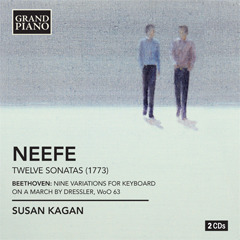 Christian Gottlob Neefe, born in 1748, is remembered today mainly as Beethoven’s first important teacher in Bonn. Neefe (pronounced Nay-fuh) was a respected and successful musician of his time: Court Organist and Kapellmeister of the Electoral Court Orchestra in Bonn, music director of a prominent theatre group, composer of numerous Singspiele (operettas) and other works, and music teacher. He became Beethoven’s teacher around 1780, in piano, organ, thoroughbass, and composition.

A great admirer of the Bach family, he introduced Beethoven to the Well-Tempered Clavier of J. S. Bach, and the music and writings of Bach’s distinguished son, Carl Phillip Emanuel Bach. In addition, Neefe was a sympathetic and fatherly friend to the young Beethoven, who later wrote to him: “I thank you for the counsel which you gave me so often… If I ever become a great man yours shall be a share of the credit.”

Neefe composed relatively few instrumental works, and these were mostly for
keyboard, principally the clavichord and fortepiano. They were composed during a time of significant stylistic change, as the Baroque period gave way to the Classical period. The Twelve Sonatas, published in 1773, are a mixture of Baroque and early Classical styles. Most of the sonatas are in three movements in the fast-slowfast sequence common in the Classical period. The Baroque influence is seen in the binary form of each movement, similar to Scarlatti keyboard sonatas and the movements of Bach’s dance suites. But the chief musical texture of the Baroque – polyphony, or counterpoint – is virtually abandoned in favour of a homophonic texture of melody and accompaniment. Only Sonata I in D minor (perhaps the earliest of the set) uses imitation prominently in both the first and third movements.

Neefe’s interest and professional association with vocal music is underscored by the emphasis in the sonatas on lyrical accompanied melodies. Several of the slow movements have unusual performance indications that reflect the emotionalism of the new Empfindsamer Stil (“sensitive” or “sensible” style) fashionable during the 1770s, such as Poco lento e languido (Somewhat slow and languid) in Sonata VI), Andante con tenerezza (Andante with tenderness) in Sonata III, Largo e mesto (Very slow and sad) in Sonata V, and Andante con gravità (Andante with gravity) in Sonata XI. Rudimentary sonata form (ABA), arising from binary form and soon to prevail as the dominant formal structure of the classical period, is used by Neefe in most of the sonata movements. As is typical of binary forms, both sections of the movements have repeat signs; but as the material from the first half is usually recapitulated in the second half, only the first section is repeated in this performance. Neefe’s indications for dynamics are sparse; generally the music is rather gentle, perhaps because of the more delicate sound of the clavichord.

The Twelve Sonatas are varied in key, tempo, and style; no two are alike, each has its individual and distinctive character. As a group, they represent some important steps along the path to the flowering Classical period.