I met a traveler from an antique land,
Who said—-“Two vast and trunkless legs of stone
Stand in the desert. … Near them, on the sand,
Half sunk, a shattered visage lies, whose frown,
And wrinked lip, and sneer of cold command,
Tell that its sculptor well those passions read
Which yet survive, stamped on these lifeless things,
The hand that mocked them, and the heart, that fed;
And on the pedestal, these words appear:
“My name is Ozymandias, King of Kings,
Look on my works, ye Mighty, and despair!”
Nothing besides remains. Round the decay
Of that colossal Wreck, boundless and bare
The lone and level sands stretch faraway.

Every time I read Percy Bysshe Shelly’s poem, I cannot help thinking about Ludwig van Beethoven, who is the only musician worthy of the reputation of “King of Kings” in the field of classical music world. Shelly’s line “Look on my works, ye Mighty, and despair!” really matches his tone well. However, Beethoven does not fancy the feeling of Kingly. He hates feudal monarchy and the ruling class, the spirit could be reflected in the story of Symphony No.3 in E-flat Major “Eroica” Op.55. Thusly, if Beethoven were to know that his No.5 Piano concerto in E-Flat Major, Op. 73 was called “Emperor”, he would be outraged. 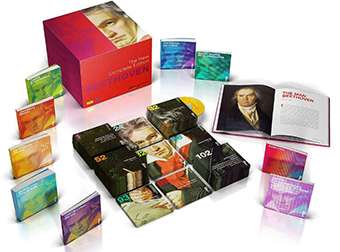 To complete Beethoven’s portrait and apprehend his humane side, I have put a piece of work about him. I think that one of the key mistakes that people constantly make about composers of classical music is we stick to preconceptions or even prejudice to compromise the masterpiece.

For Beethoven’s works, I listened to the Symphony No. 3 to No. 7 at first, and then added the famous Symphony No. 9 ’Choral’. As a common fan of classic music, I know why Beethoven is highly regarded as a sage in his field. But after I attended the Conservatory of Music and chose composing as my major, I found that it is necessary for me to study the other unknown works, so as to examine how great a composer make progress. Besides the trajectory of growth, one cannot often discover some of his less extreme work. For example, the great conductor Christian Thielemann said that Symphony No. 2 & No. 8 are too hard to interpret. Beethoven considered nothing more important in his life than his devotion to art. Therefore, it was artistically and morally imperative for him to demonstrate his art, even he had been suffering from impaired hearing. In his works, from Symphony No. 1- No. 9, from piano sonatas No. 1 – No. 32, you will find an unconventional self-made man but not what we usually called a genius. This is especially the case for his later piano sonata & string quartet, to which he devoted enormous energy and spirt. There is no such thing as a genius born with the blessing of muse, but some of well-known composers make every effort to display their originality which is tantamount to that of genius, especially at their young age.

I could mention Mozart or Shostakovich. Their early work and productivity are far better than those of Beethoven. You could also find compelling evidence in their manuscripts to substantiate such notion. I think that is mostly why they are still credited for their massive influence on musicians that came after them. Some composers need to burn their early draft so that these works would not be published posthumously without consent. 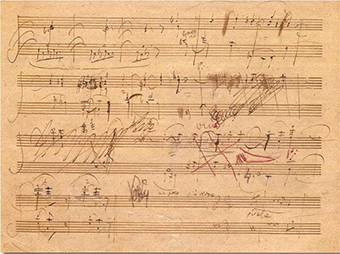 Facsimile of the autograph and first edition of Beethoven’s
Diabelli Variations Op. 120 © www.omifacsimiles.com

We are lucky to live in better time. We could catch up to the 250th Anniversary of Beethoven. In Guangzhou, my hometown, we have the chance to listen the all-Beethoven Piano Concertos cycle, Beethoven’s only Opera Fidelio, the Complete String Quartets & piano sonatas throughout the whole year. In the interaction between nationalism and political culture, Beethoven has always been interpreted to reflect the opposition to feudalism. A lot of Beethoven’s middle-late work contains a simple homespun philosophy. Richness needs gifts with which not everyone is endowed, whereas simplicity by no means comes by nature. If you ask me about my choice of Beethoven’s works, or is there any of his work that should not be debased, I should recommend the Bagatelles Op. 126, which was Beethoven’s farewell to piano composition. The other will be An die ferne Geliebte, Op. 98 & Diabelli Varaiation Op.120. And I sincerely hope you could listen these pieces with couple of his early works, like Diabelli Varaiation with the Eroica Variations Op. 35 etc. Edward Waefie Said expressed in the book titled Against the Grain that a highly artistic condensation will be more appropriate. We will always benefit from increased mutual understanding of cultural exchange. The more you find you misconstrue music, the deeper you can delve into it.