Composers Anecdotes
Musicologist to the Rescue!
by Maureen Buja May 28th, 2017 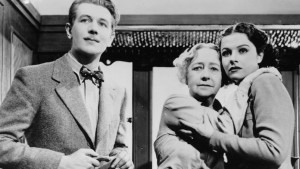 Michael Redgrave as the musicologist Gilbert, Dame May Whitty as Miss Froy, and Margaret Lockwood as Iris Henderson

There are a handful of films featuring musicologists – those scholars of the history of music. Two recent ones have been Songcatcher (2000), where a musicologist finds ancient Scots-Irish ballads in Appalachia, and then there’s The Silent Touch (1992), where a musicologist brings a silenced composer back to music. But we were watching a much earlier film where it’s the skills of the musicologist that saves the heroine and day, and, of course, in those heady days before WWII, the spy message.

Our heroine, Iris, is in the rustic European country of Mandrika and is heading back to London and a society wedding in Hanover Square (that would be at the Church of St. George, Handel’s church in London). She’s bothered by noise from the upstairs hotel room, which sounds like a room full of clog dancers and clarinet players, and pays the hotel manager to get rid of them. The clarinet player is the musicologist, Gilbert, who is collecting “one of the lost folk dances of Central Europe.” 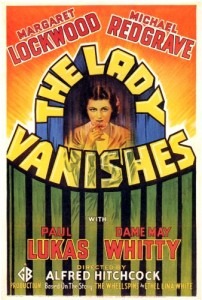 The movie is Alfred Hitchcock’s The Lady Vanishes (1938) and it turns out that the lady who has vanished, the elusive Miss Froy, governess and counterespionage agent, is bringing back a melody that contains “in code, the vital clues of a secret pact between two European countries.” The melody was passed to Miss Froy by a street singer who is quickly strangled, but not before she has captured the melody. When you go back and look at the film again, you realize that the street singer tried to pass the melody to Miss Froy much earlier but it was interrupted by Gilbert’s noise upstairs.

Miss Froy sings the melody to the musicologist, who vows to commit it to memory, before she slips off into the woods. Now, she feels, there are two chances for the melody to get through successfully to “Mr. Callendar at the Foreign Office.”

Our daring couple escape, get to the Foreign Office where Gilbert, in a sudden attack of nerves, forgets the melody, which has been replaced in his head with the Wedding March (Iris isn’t going to have that society wedding after all!). The best part of all is when they get into the Foreign Office and there is Miss Froy playing the piece on piano, having already successfully delivered her melodic message. We can only hope that this is a faithful capturing of the Foreign Office in the 1930s, where offices were equipped with grand pianos as a matter of course! 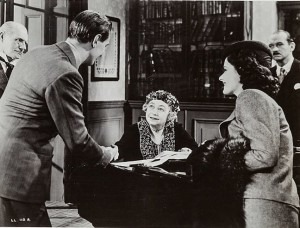 The well-equipped Foreign Office of the 1930s

The music, uncredited in the film, was by Louis Levy and Charles Williams. Levy did work on some 231 films between 1935 and 1958; Williams also began working in 1935 on films and his melodies continue to appear in movies and TV series today, particularly the Devil’s Galop, which has been used in TV series such as 30 Rock and the English comedy series That Mitchell and Webb Look.