I have observed a bipolarity in my musical self that reflects through my two main musical activities; improvising and composing. Both completing each other — not through their similarities towards a creative goal but rather through their differences of qualities and more importantly their resulting sound. I call it musical schizophrenia; the two poles of my musical personality, that shows both by the content and the form of my creative output, as well as the choice of my musical mediums.

Whenever I improvise there is a raw self that takes control and speaks for me. I improvise mostly on the guitar; an instrument that I have been playing for fifteen years. This lap of time, has given me enough control over the instrument to lose control of it. The guitar is my biographical instrument; one can hear over a decade of music studies from rock’n’roll to jazz. Whether I try to unlearn, there are expressions that remain and form my musical performing self. When I improvise, I often think of the American musician and guitarist Bryan Baker. He approaches music very much as a medium to communicate energy and emotions — something very well explained in his Principles of Music. Stravinsky is often in the back of my mind too. Or Frisell. It is messy, uncontrolled and sometimes perhaps savage. A musical catharsis. Consequently, this musical behaviour does not show on the piano, as it is the instrument that I have used as my composing tool.

Whenever I compose it is a self that is a lot quieter and more controlled; a wiser one perhaps, that seems to think more before acting. One that has learned from Cage. Or Pärt. One that takes distance from the instrument, and uses the ears more than the instinct, the brain more than the heart. The use of the piano results from a different objective. The one reproducing the sounds that I would want to have in my head. The direction I want to go towards. It is a very cerebral process. (This is also the reason why I am not bothered by having someone else perform my music on this instrument). When I compose, I often refer to the architect — something that I have explained multiple times — and it is a lot more about structures, and organisation. And most importantly where the possibility exists; the return back in time.

In terms of improvising, I focus on tension, release, impulses, abstractions, textures and impressions; while during composing, I often think of simplicity, macro, micro, structures, mathematics, geometry, narratives and images. 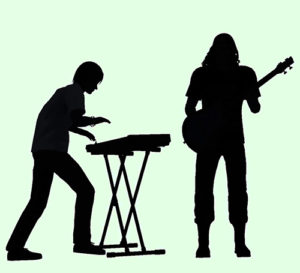 Why calling it musical schizophrenia? First and foremost due to the uncontrollable nature of it. Whether I try to educate myself towards another direction, there are habits and safety nets that cannot be unlearned. The guitar is an instrument that I have learned, and unlearned several times. Both personalities coexist, and form together one musical self.

Improvising and composing resemble a lot to speaking and writing. Composing is a very instrument-less process. Improvising on the other hand is done exclusively with an instrument in hands, which acts as the translator of thoughts.

By acknowledging these two distinct approaches to creating sounds, rather than unifying my musical personalities, I have allowed my output to become richer and more diverse. There are two me’s, two selves and two musicians in one: fire and water, heat and cold, two distinct elements that cannot live without each other — and similarly that kill each other.

The intellectual and the passionate, the introverted and the extroverted – Mr. Jekyll & Dr. Hyde.