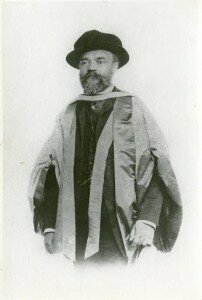 Czech music critics mercilessly criticized Antonin Dvořák for his supposed cosmopolitan musical tendencies. And as a result, he was performed and published less in Bohemia than in foreign lands. In stark contrast, Dvořák gained a particularly loyal following in England, and the performance of his Stabat Mater in London in 1883 made him a bona fide celebrity. The Royal Philharmonic engaged him as a guest conductor in 1884, and his Sixth Symphony made a huge impression with the orchestra and the audience alike. In June 1884 the Royal Philharmonic Society elected him a member, and they commissioned a symphony. Dvořák was in no particular hurry, and he waited 6 months before he began to work on it. Once engaged, Dvořák completed the work in 3 months and it received its brilliantly successful first performance on 22 April 1885 at St. James’s Hall in London, with Dvořák conducting. Rather predictable, the new work scored another resounding success for its composer.

Dvořák writes, “Splendidly, really splendidly. This time, too, the English again welcomed me as heartily and as demonstratively as always heretofore. The symphony was immensely successful and the next performance will be a still greater success.” Despite its immediate popular appeal, leading the work to publication turned out to be something of a nightmare. The publisher Fritz Simrock refused to print the symphony until a piano duet arrangement was available, and he refused to print the Czech “Antonín” on the cover, insisting on the German “Anton” instead. And when the publisher required that the dedication to the London Philharmonic Society would be omitted, Dvořák was not amused. He doubled the price, suggesting that other publishers would readily pay that amount. And of course, he was correct, so in the end Simrock grudgingly paid the requested 6,000 marks. The work was published as his Symphony No. 2, the second Dvořák symphony in print, even though it was already his seventh work in the genre.