Music and Literature are like twin sisters. Not necessarily identical, but deeply connected in ways that can’t be easily explained. When the great Russian novelist and writer Leo Tolstoy published his1889 novella on the ideal of sexual abstinence and jealous rage, he surprisingly titled the work The Kreutzer Sonata. As you well know, Ludwig van Beethoven, after going back and forth on the dedication, gave that same title to his Violin Sonata No. 9, Op. 47 in 1803. The works had always been known for its demanding violin part and it’s enormous emotional scope, ranging from a predominantly furious first and meditative second movement, to a high-spirited conclusion. And all that emotional exuberance served Tolstoy as the backdrop for his narrative.

Pozdnyshev, the main character of Tolstoy’s novella is taking a train journey and overhears a conversation on marriage and how it should be based on true love. Questioning the concept of true love, he suggests that initial love can quickly turn into hatred. He also suggests that women will never enjoy equal rights as men, as long as they are viewed as objects of desire. Sexuality does give them power over men, he argues, but it is all geared towards pleasure. At a later time, Pozdnyshev falls in love with a woman and she becomes his wife. They have a number of children, but things aren’t going well. His wife has fallen in love with the violinist Troukhatchevsky and they perform Beethoven’s Kreutzer Sonata together! “Some music,” Pozdnyshev explains, “is so powerful that it can change one’s internal state to a foreign one.” After he returns early from a trip, he finds the violinist and his wife together and kills her with a knife. The violinist, however, escapes: “I wanted to run after him, but remembered that it is ridiculous to run after one’s wife’s lover in one’s socks; and I did not wish to be ridiculous but terrible.” Pozdnyshev is later acquitted of murder and endlessly rides the trains seeking forgiveness. 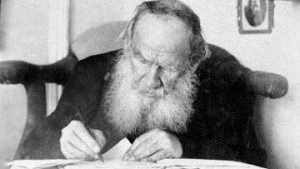 Russian authorities promptly censored Tolstoy’s Kreuzer Sonata, and American president Theodore Roosevelt called the author a “sexual moral pervert.” Tolstoy was severely criticized for “disliking being a man, and pitying humanity because it is human.” Whether you agree that “animal excesses” and “swinish connections” are the fundamental basis for the relations between the sexes or not, the emotional impact of Tolstoy’s writing is undeniable. It quickly inspired a 1901 painting by René François Xavier Prinet appropriately entitled Kreutzer Sonata. And Leoš Janačék’s first string quartet, published in 1923 is subtitled “The Kreutzer Sonata” as well. 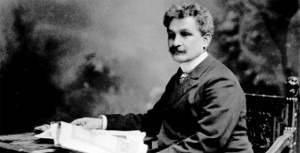 The music, according to Janačék, mirrors the psychological drama of love, jealousy and murder detailed in the literary work. He writes, “I was imagining a poor woman, tormented and run down.” The “Adagio-Con moto” opens with a freely flowing tapestry of sounds that is impatiently interrupted by harsh rhythmic impulses from the first violin. These emotional outbursts provide the musical contrasts for short segments of ethereal calm, and the movement clearly mirrors the periods of passionate love and vicious fights described by Tolstoy. The second movement simply titled “Con moto” juxtaposes a waltz-like theme—making musical allusions to Beethoven’s Kreutzer Sonata—with a modally inflected theme presented by the cello. This theme, which receives short contrapuntal treatment, is brusquely projected against a shimmering background of the upper strings. A three-part division governs the “Con-moto-Vivo-Andante” movement. A lyrical and expressive melody is harshly interrupted by callous sonic dissonances. Following an emotional and tumultuous “Vivo”, which relies extensively on acidic pizzicato passages, the “Andante” sounds unadulterated passion. Although the concluding movement “Con moto-Adagio” begins with quiet contemplation, it soon begins a turbulent and inevitable rush towards the final climax.