Artists Interviews
Music, Musicians, and Climate Change
An Interview With John Warner, Founder of the Orchestra for the Earth
by Fanny Po Sim Head June 20th, 2022

Breathe: A Countdown to Earth Hour

Orchestra for the Earth (OFE) was founded in England in 2018 to share the message of valuing and protecting our beloved earth. John Warner, the founder and current artistic director of OFE, is a growing star in today’s conducting world. He is the Conductor in Residence with Oxford Opera. He has conducted many of the world’s top orchestras, including London Symphony Orchestra and BBC Philharmonic; he also assisted many notable conductors, including Simon Rattle. In this interview, Warner shares his purpose and goal of founding OFE and his life as a musician and a conductor.

Can you tell us a little bit about yourself and what inspired you to establish the Orchestra for the Earth? 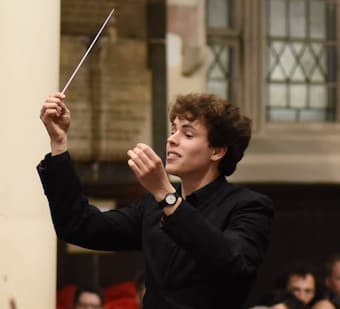 I wanted to be a conductor since I was at school, but as I left University I was filled with the feeling that I needed to do something about the climate and ecological crisis. Part of me thought music was helpless in the face of that, so I should just find a job directly in conservation or sustainability. However, I wanted to believe that music could make a difference, and that I could follow my dream vocation while also making a positive difference for nature and climate. My aim in founding OFE was just that: to use music to share my and my fellow musicians’ love of the natural world to inspire others. The usual channels through which we learn about climate issues—documentaries, newspaper articles, podcasts—we experience alone. The result can feel utterly overwhelming, isolating, and paralysing—only compounded by lockdowns. Concerts, on the other hand, are the opposite. They are shared spaces, chances to connect with other people, to socialise, to share ideas, to feel part of a community. We need such occasions now more than ever, not just for our own happiness but to allow us to see that we are not alone in worrying about the planet or in our efforts to protect it.

Mahler: I am lost to the world

Has the audience response changed in the years since OFE was established? Have the increased effects of climate change led to a noticeable difference in attendance/participation? In light of climate change skepticism, did you have much resistance when you started?

Definitely. It’s hard to believe, but climate change still felt like a fringe issue in 2017, when the orchestra played its first concert. A year later we saw the two epoch-making events of our time: Greta Thunberg’s first School Strike for Climate in August and the first major Extinction Rebellion event in October. These events have brought about a sea-change in the profile given to climate and environmental issues, putting the issue at the front of the agenda in a way that half a century of campaigning never did. There is still maddening resistance from politicians to take the necessary rapid action, pressurised by powerful corporations and bolstered by media barons, but the public stance on the matter is unequivocal. The biggest ever survey on this, carried out by the UN last year, showed an overwhelming majority worldwide now sees climate change as a “global emergency.” OFE was founded just on the cusp of this change, and I was even advised not to found the orchestra as an exclusively environmental one because it would restrict our interest to audiences and promoters. The opposite has proved true, and we’ve been able to ride the wave of public enthusiasm in a way I could only have dreamed of.

OFE has collaborated with various organizations and professionals to offer different outreach programs and performances. Is there one that is particularly memorable? 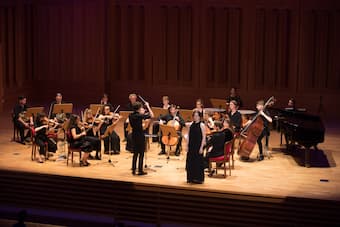 Orchestra for the Earth

It’s hard to choose, but in many ways the core of our work is our annual Alpine Tour, for which we collaborate with a whole range of communities and organisations in the EU. It follows in the footsteps of one of my favourite composers, Mahler, who spent every summer up in the mountains soaking up inspiration. The little huts where he shut himself away to put pen to paper still stand, surrounded by the same stunning mountains, lakes, and valleys he and many others treasured. Without these places, most of the music we know and love simply would not exist. We have built close relationships with communities out there based on music and our concerts have proved important stimuli for building cross-community support for environmental projects, including a new nature reserve and a children’s that brings together outdoor activities and music. Last year a renowned Dutch filmmaker called Frank Scheffer made a beautiful film about the tour called Singer for the Earth. For me, the whole project is an example of the deep connection between music and nature, and the power both have to bring people together.

Mahler: Symphony No. 2 “Resurrection” (“Choir of the Earth” & “Orchestra for the Earth”)

As a music director of Oxford Opera and visiting conductor in many different well-known orchestras in Europe, how do you make time for OFE?

It’s not always easy, but as a freelancer I do at least have some control over my own time: even if it doesn’t always feel that way! The planning and organizational aspects of OFE are the most time-consuming, but I have a very supportive Board of Trustees who make life a lot easier and contribute a lot to the depth and breadth of what we do. My other work also allows me to meet many new people and visit new places, which can be great for spreading the word about OFE, hearing diverse opinions, and building important connections. The collaborative aspect of our approach is very important to me, so when I’m not doing OFE work directly, I’ll be learning something that will enrich it.

What do you envision for OFE in the future? 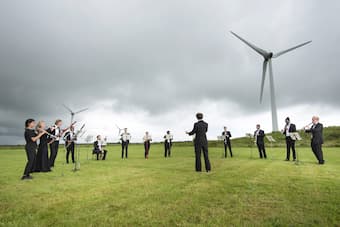 We have some big and exciting plans, but I’m also keen to let things develop gradually and naturally. So much of the music world plans three years ahead or even more, which can be a problem if you want to be creating events that are relevant to the here and now. But in principle I want the orchestra to keep reaching out to new and diverse audiences to spread our message far and wide. To do so, we’ll have to keep broadening the range of repertoire and genre we play, as well as the people we work with, be it speakers, writers, filmmakers, and scientists.

Are there any upcoming new projects for OFE?

This July we are heading off to the Alps as we do every year, building on our outreach and conservation work with audiences and communities out there. We’re playing a programme of music inspired by folk songs, which so often speak of humanity’s connection with the natural world with a beautiful simplicity and honesty. I think that’s one of the reasons so many composers found them an inspiring starting point for their own music. We’re also planning to revive our annual candlelit Earth Hour concert with WWF, which hasn’t been possible for the last few years because of the pandemic. Watch this space!

As musicians, what do you think we could do to raise awareness of climate change? 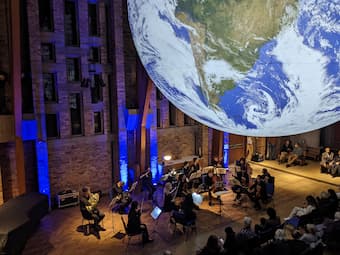 In my opinion, there are two main ways musicians can help shift the culture on climate change. First, by setting an example in how they go about their work. Flying less is a big one, and I’m so glad to see momentum building on this. For work within Europe especially, it is easy and often much more relaxing to travel by train. It may take a little longer (not always!), but you spend the majority of the time sitting in a comfortable seat with a beautiful view out the window, which can be great for either working or relaxing. Far better than standing in a security cue at an airport! I would guess that most people fly simply because they don’t think to take the train, so the more we can show people how land travel is greener and better, the more people we can take with us. The other way we can make a difference is by talking about nature and climate at our concerts, programming around it, and working with speakers/artists etc. engaged with the topic. Climate change affects all of us and mustn’t be separated as an isolated problem. It pervades everything, so we need to keep the conversation going everywhere, including concerts.

Indeed, music is such a powerful communicator, and it can alter people’s minds and hearts. Please visit https://www.orchestrafortheearth.co.uk to learn more and support the Orchestra for the Earth.