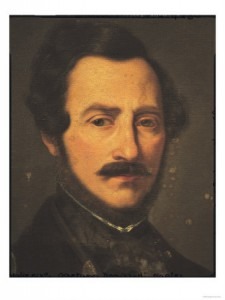 Gaetano Donizetti (1797-1848) was one of the most prolific Italian composers in the second quarter of the 19th Century. He composed roughly 100 songs, several symphonies and oratorios, cantatas, chamber and church music. Yet his reputation invariably stands or falls with his 70 works for the operatic stage. When Robert Schumann reproachfully described Donizetti as a composer of “music for the puppet theater,” he clearly viewed his sentimental comedies through the eyes of German musical culture, which after all was rooted in a largely literary and philosophical notion of education. Gradually, however, we have come to understand that Donizetti had a profound influence on the future of Italian opera in general, and on Giuseppe Verdi in particular. Donizetti grew up in abject poverty in the town of Bergamo. It was music, and the instructions he received from the German composer Simon Mayr that allowed Donizetti to escape his disadvantaged background. Mayr was the maestro di cappella at the cathedral of Santa Maria Maggiore in Bergamo yet pursued a distinguished career as an opera composer throughout Italy. His first opera Saffo was staged in Venice in 1794, followed in quick succession by nearly 70 operas performed at “La Scala” and other Italian theatres.

Mayr’s operas enjoyed an increasingly large number of performances abroad, and Louis Spohr remarked, “Mayr has if not so much imagination as Rossini, yet, certainly, more knowledge and aesthetic feeling.” And the German musicologist Ludwig Schiedermair wrote, “Germany gave England a Handel, France a Gluck and Italy a Simone Mayr.” Under Mayr’s carefully tailored and supervised instruction — he even sent his young charge to Bologna to study counterpoint — Gaetano quickly developed into a capable musician and composer. His first operas enjoyed limited success, but Anna Bolena of 1830 represents a watershed in Donizetti’s career. The libretto deals with the Tudor period in English history, and after its overwhelming success at the Teatro Carcano in Milan, Donizetti, together with Bellini and Rossini “emerged as one of the three most luminous names in the world of Italian opera.” Furthermore, the work was subsequently performed in London and Paris, enabling Donizetti to embark on a highly successful international career. 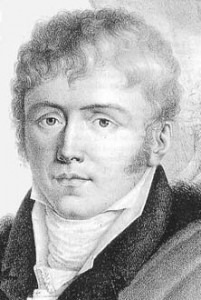 Donizetti followed the resounding success of Anna Bolena with two additional serious operas, Lucrezia Borgia of 1833, and Lucia di Lammermoor of 1835. Both operas considerably influenced not only Verdi but Puccini as well. Solo numbers evolved into “a large-scale form in which monumentality of design and sophistication of internal workings interact and mutually support each other.” A more sophisticated dramatic characterization gradually caused the division into recitative and aria to be blurred, and introductory ‘scenas,’ as well as extended transitional sections between cavatina and cabaletta, consisted of arioso sections ranging in style over all “gradations from recitative to genuine aria.”

Rossini regarded Lucia di Lammermore as Donizetti’s supreme operatic achievement. It epitomized the Italian Romantic spirit of the 1830’s, and was composed in merely six weeks. First produced in Naples in 1835, the libretto closely follows the historical novel by Sir Walter Scott. Without doubt, it served as a model for the young Verdi, who looked upon Donizetti as an Italian composer who was highly successful in using French dramatic techniques on the Italian stage. Verdi improved Donizetti’s heritage of abandoning the sharp dichotomy between recitative and aria in favor of countless hybrid forms in unpredictable alternations, sensitively and minutely adapting the music to the demands of the drama. It has been suggested that the Verdi operas written between Oberto (1839) and Stiffelio (1850) owe their effectiveness in large measure to the dramatic efforts of Gaetano Donizetti.

In 1844, Donizetti wrote, “My heyday is over, and another must take my place. The world wants something new. Others have ceded their places to us and we must cede ours to still others… I am more than happy to give mine to people of talent like Verdi.” Please join me next time for the final installment exploring the dramaturgy of Grand Opera and its influence on Giuseppe Verdi.