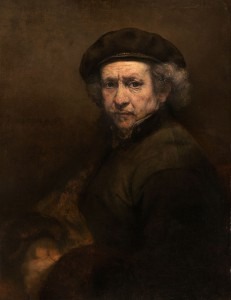 The Dutch painter Rembrandt van Rijn (1609-1669) brought Dutch painting to its Golden Age – matching Dutch society’s great wealth and cultural achievements with an innovative and creative style of painting. He trained the generations of artists that followed him and brought the often-despised idea of portraiture to a new understanding of how the image could show the viewer the inner person.

He inspired the Dutch composer Henk Badings to create his 1942 opera The Night Watch, and the same work was the inspiration to another Dutch composer. Johan de Meij’s Dutch Master’s Suite in three movements was based on three famous Dutch paintings by Rembrandt, Vermeer, and Steen, all in the Rijksmuseum collection in Amsterdam. The first movement, on Rembrandt’s 1642 monumental painting of the Militia Company of District II under the Command of Captain Frans Banninck Cocq, better known as The Night Watch, captures the military nature of the picture and you can almost imagine the company marching in to be painted.

Johan de Meij: Dutch Masters Suite: I. Nachtwacht (The Night Watch) (after R. van Rijn) (Osaka Municipal Symphonic Band; Norichika Iimori, Conductor)
Cornelis Dopper (1870-1939), a Dutch composer, made his conducting reputation at the Concertgebouw Orchestra as the second conductor under Mengelberg. He received the invitation after he conducted his Third Symphony, Rembrandt, at the Concertgebouw. The Rembrandt Symphony was written in 1906 as part of a general Dutch celebration of the birth of Rembrandt. The Concertgebouw Orchestra commissioned several renowned Dutch composers to create music for the anniversary and Dopper’s work was part of that celebration. 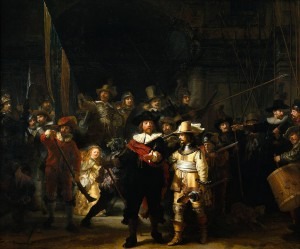 The work does not depict anything specifically about Rembrandt but is more an overall portrait of the time of Rembrandt. The symphony is considered a work of art, standing for the character of the Dutch people, their art, and national geography.

Dopper: Rembrandt Symphny: I. Adagio ma not troppo – Allegro non troppo. (Hague Residentie Orchestra; Matthias Bamert, cond.)
The closing work for the 1906 celebrations was written by Alphonsus Diepenbrock (1862–1921). His style combines 16th century polyphony with Wagnerian chromaticism. His university work was not in music; he was awarded his doctorate for his work in Latin. As a composer, he was completely self-taught, hence his unique and idiosyncratic style.

His work Hymne aan Rembrandt, was written for soprano, female chorus, and orchestra, You’ll hear a lot of Wagner in this work, but it remains only a memory of Wagner. Diepenbrock was very successful here in making Wagner anew. 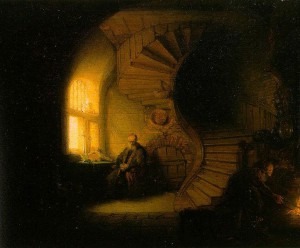 The Philosopher in Meditation (1632)

Diepenbrock: Symne aan Rembrandt: II. O Rembrandt, hemelicht’ (Eva-Maria Westbroek, soprano; Netherlands Radio Symphony Orchestra; Ed Spanjaard, cond.)
At the premiere in 1906, this was the last piece on the program and was given a very theatrical setting:

Only the soprano, Aaltje Noordewier-Reddingius, was visible on the stage, dressed in a long, white gown in a beam of soft blue rays of light, against a backdrop of purple and scarlet red with a cornflower blue banner. The female choir (members of the Toonkunst Choir and Klein Koor a Cappella) sang from the wings. At their entry the backcloth opened and Rembrandt’s studio appeared with his design for the Night Watch. An angel with a branch of a palm tree stood by the empty chair of the master.

Dufourt: Le philosophe selon Rembrandt: I. – (Ensemble Modern Orchestra; Dominique My, cond.)
On a more modern note, French composer Hugues Dufourt’s modernist Le philosophe selon Rembrandt, based on Rembrandt’s 1632 painting The Philosopher in Meditation, and takes the intricate chiaroscuro original into a reflective modern sound scape. The painting itself is full of lines: straight, curved, circular, and radiating and so we hear the music swirl around a very still centre.