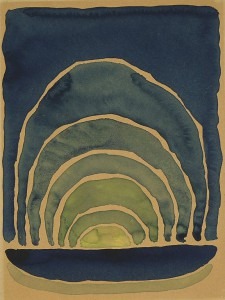 O’Keeffe: Light Coming
on the Plains

The American West was a unique inspiration for a number of artists, but it is in the work of the American artist Georgia O’Keeffe that a new eye was cast on the broad horizons. Her three watercolors from 1917, Light Coming on the Plains, Canyon with Crows, and Starlight Night, inspired an American composer to attempt the same in sound as O’Keeffe accomplished with light and shadow.

Georgia O’Keefe (1887-1986) studied watercolour since age 10 and did her formal studies in art in Chicago. After working in Texas, South Carolina and New York, she became head of the art department at West Texas State Normal College (now West Texas A&M University) in Canyon, Texas from 1916 to 1918, when these paintings were done.

In Light Coming on the Plains, sunrise is shown in expanding ovals, with the light coming from the middle. Each new ring pushes the light from the centre, and the darkness of night disappears. The American composer Dan Welcher (b. 1948) used the work as the inspiration for the first movement of his 1985 orchestral work Prairie Light: Three Texas Water Colors of Georgia O’Keeffe.

Welcher: Prairie Light: I. Light Coming on the Plains (Honolulu Symphony Orchestra; Donald Johanos, Cond.)
Welcher uses the image to show sunrise in music – from a very quiet beginning the day becomes increasingly warm and expansive. The melodic line extends and we are taken from the flat horizon, the darkest part of O’Keeffe’s painting, to the bright rising of the sun. 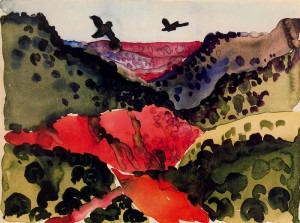 In Canyon with Crows, O’Keeffe paints Palo Duro Canyon, which was a common subject in her work. If you are more familiar with O’Keeffe’s skull paintings, the bright colors here will be a surprise. The depth of the canyon in purple lightens to yellows and oranges, with a central red wall. Above the canyon are simple crow shapes in a pale blue sky.

Welcher: Prairie Light: II. Canyon with Crows (Honolulu Symphony Orchestra; Donald Johanos, Cond.)
This becomes mid-day in Prairie Light. The brass suggest movements of birds and other animals while the crows are depicted by the solo clarinet, oboe, and flute. The movement closes with a duet of the last two crows in the picture. 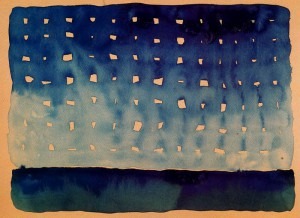 You can see the connection between Light Coming on the Plains and Starlight Night if you imagine them both being painted from the same viewpoint. The flat horizon sets the bottom of the picture and the light gets darker as it goes further up the page. The stars are not points but squares of light, sitting in exact rows and columns.

Welcher: Prairie Light: III. Starlight Night (Honolulu Symphony Orchestra; Donald Johanos, Cond.)
This closes the Prairie Light day. It opens with a flute solo that is echoed in the violins. Welcher takes the odd square stars as inspiration for the piano and xylophone to set up a contrasting percussive rhythm. The nighttime melody returns and is combined with the sunrise melody from the beginning. And, so, even as the first and last paintings echo each other, Prairie Light comes to a full circle – the light comes, it goes, and the shadows return.