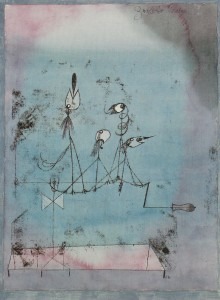 Paul Klee (1879-1940) was a Swiss-German painter with a unique style sometimes humorous, sometimes childlike, and always able to draw us into his work. Of all the composers we’ve looked at in this series, it is Klee who has inspired a monumental number of composers.

When we look at how his art was associated with various styles, including Expressionism, Cubism, Futurism, Surrealism, and Abstraction, we can see how he would hold a composer’s interest. In this article on Klee, we’ll move from the usual point of a picture and how a composer responded to it to a larger view of one picture and how many composers responded.

The 1922 work, Die Zwitscher-Maschine (The Twittering Machine) shows 4 birds perched on a crank. Everything is carefully balanced and there’s a helpful handle on the end for turning the crank. The birds’ weight has distorted the line they sit on and they all face different directions.

American composer Cindy McTee (b. 1953) declares a life-long fascination with the work of Paul Klee and takes elements from the picture, such as its whimsical, mechanistic, and ironic characteristics and uses them as the focus for the faster parts of her 1993 piece, whereas the light blue of the background becomes the lyrical field in the slower parts of her work. Her use of the solo piccolo can stand for one of the birds, singing. She also sees danger in the picture (what happens to the birds when the crank is turned) and depicts that musically as abrupt silences (what happens to the musicians if they miss the rests).

Andrew May: The Twittering Machine for flute and computer (Elizabeth McNutt, flute)
Dmitri Tymoczko (b. 1969) takes a more lyrical examination of the picture. This work, from 1998, is much more traditional than his current work and has a restless feel paired with a mechanistic idea that seems to be depicting a rather animatronic set of bird.

Dmitri Tymoczko: This Picture Seems to Move: I. Twittering Machine (Amernet String Quartet)
Chinese composer Tan Dun (b. 1957) was inspired by an exhibition of the works of Klee at MOMA in New York. Intended as a symphony that was, at the same time, a dialogue between himself and Klee. He says “Line, which in [Klee’s] thinking was associated both with melody and dynamics, was a major element in his work. This is closely related to the Chinese aesthetic, which is linear, non-harmonic, and seeks the soul of the work rather than its surface effects.”

Tan Dun: Death and Fire, “Dialogue with Paul Klee,” Insert 3: Twittering Machine (Helsinki Philharmonic Orchestra; Muhai Tang, cond.)
We are surprised when we hear the sharp guitar opening of Paul Osterfield’s (b. 1973) work for flute, clarinet and guitar. This 2007 work seems to focus less on the twittering that other composers heard and more on the inherent stillness of the machine the birds sit on.

Peter Maxwell Davies: 5 Klee Pictures: No. 3. The Twittering Machine
Gunther Schuller (1925-2015) was a well-known musician, composer, conductor and music historian and his 7 Studies on Themes of Paul Klee from 1959 seems to be the most successful of all the works we’ve heard in conveying the twitter of the birds, their danger on the machine, and the machine itself.

Gunther Schuller: 7 Studies on Themes of Paul Klee: No. 4. Die Zwitschermaschine (The Twittering-Maschine) (Boston Symphony Orchestra; Erick Leinsdorf, cond.)
This is just a sample of the many composers who took Paul Klee as their inspiration – and this is just a few works on one of Klee’s paintings. Klee drew over 4,000 works and they continue to be an inspiration for music.