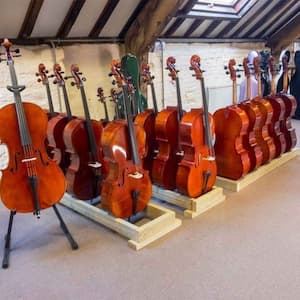 It’s hard to believe how many hilarious behind-the-scenes mishaps we musicians experience. Afterwards, once we’ve recovered from the embarrassment, we love to share these stories at parties!

My friend cellist Clay Ruede recently told me this one: He was playing a show on Broadway and he kept a cello at the theater. One Sunday the orchestra was advised that heavy storms were on their way and the theater basement could flood. It would be wise if the musicians removed their instruments from the lockers as a precaution. Clay took his cello home. The following Tuesday, the musicians gathered for the next show and chatted backstage while waiting for the “places” call. When the loud speakers announced, “Places please. Musicians, places,” Clay went to his locker but the cello wasn’t there. It was still at home. Thinking quickly, he ran out to a nearby music shop, he purchased a cheap cello, and got back to the theater and his seat just in time for his first solo. After the show Clay returned the cello for a full refund.

A couple of years later, Clay performed for a different Broadway musical. Just before Showtime a violinist in the orchestra called in a panic that there had been an accident on the highway. Frantic she would be late, she admitted that she’d also forgotten to bring her violin. Clay told her not to worry. He knew what to do! He left the theater, bought a violin for her at the same music shop, and placed the tuned violin and a bow on her chair. The violinist made it just in time for the performance. 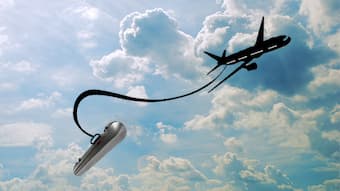 Forgetting bows or instruments is more common than you might think! Another colleague described how many times his gear enjoyed traveling without him. Roland Hutchinson mentioned how his baryton bow once failed to get off the bus in Eisenstadt (not its fault) and the bow went on to Vienna without him. Fortunately, the bus line found the bow and it was returned without incident before the performance. Another time one of his viols “forgot” to get off the airplane in California and on it went to Hawaii (the airline’s fault). The carrier delivered the instrument to Roland by van the following day. When traveling to South Africa another colleague also left her bow on a plane. Upon reaching the baggage claim area she suddenly remembered the forgotten bow and in a panic raced back to the gate where she found the entire crew gathered around the long box. Lost in speculation they were trying to guess what this mysterious box contained: a flute? A pool cue? Some type of narrow rifle? A baguette?

Losing instruments happens on tour too! Gill Tennant recalls when her youth orchestra traveled to Moscow. An entire tranche of instruments went directly to Moscow but the group first had a concert in Copenhagen where the musicians disembarked. Oops! Fortunately, Copenhagen’s youth orchestra members were able to lend their instruments for the concert. The timpanist wasn’t too happy. The Copenhagen counterpart didn’t have any timpani. This is especially problematic in the fourth movement of Shostakovich Symphony No 5. The timpanist had to stand on a stool to bang on an enormous 15-foot-tall side drum. 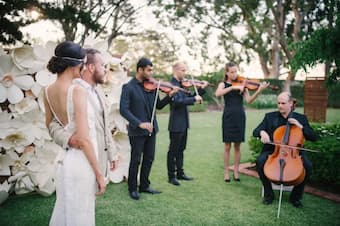 Forgetting music is a classic faux pas. Fortunately, many musicians have phenomenal memories at times like these but forgetting where you’re supposed to be going is another story. Freelancers who often have to travel to several different venues find this a frequent mishap. Imagine the chagrin. A colleague played an entire wedding gig. When she asked the bride’s father for payment he was puzzled. They hadn’t booked any musicians. He’d actually thought it was such a nice perk that the venue provided a string player. Meanwhile at the same venue another wedding party wondered what happened to the musician they booked.

It’s easy to show up at the wrong hall. A colleague realized her error and had to walk a half mile on a hot afternoon across town wearing her long black dress and high heeled shoes and of course carrying, a music stand, music bag, and the cello. She made it to the performance on time.

Wardrobe failures plague us too. I remember wearing a lovely sheer cream and rose-colored dress for a chamber music concert. The bright stage lighting shone from behind us. My chamber music partners leaned toward me and whispered that the audience could see right through my skirt. They accommodated this turn of events by standing directly behind me while we exited the stage, trying unsuccessfully to keep a straight face. We’d hoped the Charles-Marie Widor Piano Quartet in A Minor Op. 66 would be alluring but not that alluring!


Years ago, Clay’s trio was about to make its Washington, DC debut at the Philips Gallery. The Gallery was being renovated, so the concert had to be held at a different venue. There the stage was 8 feet above the audience with the “backstage area” located behind the audience. The musicians had to walk through an aisle in the center of the audience and up a staircase in the middle of the stage to get into playing position. For the Sunday afternoon concert the musicians wore suits and not their customary tails. Clay’s cello was lying in its case on the floor of the so-called “green room.” When he bent over to pick up the cello he heard an embarrassing riiipppp. His pants split all the way from the waistband in the back to the zipper in the front. The pianist sprang into action and followed Clay very closely as they marched back and forth through the audience. Despite everything they got a rave review in the Washington Post, and in hindsight, he said, he was much cooler playing the concert with the additional ventilation.