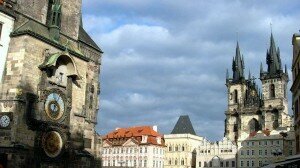 Wolfgang Amadeus Mozart had contemplated a journey to London in the autumn of 1786. However, his father Leopold strongly objected, and he even refused to look after Mozart’s children. As such, instead of going to London, Mozart accepted an invitation to Prague. The biographer Franz Xaver Niemetschek wrote, “The admiration for [Mozart] went so far that one of our most noble cavaliers and connoisseurs of music, Count Johann Joseph Thun, who himself maintained a splendid band, invited him to come to Prague, and offered him lodging, board, and every convenience in his house.” Mozart arrived on 11 January 1787, and stayed for approximately four weeks. A concert was organized for his financial benefit on 19 January, and the “Prague” Symphony was first performed. Originally, Mozart had intended to perform his “Paris” Symphony with a new finale, but at the last second opted for the new work instead. 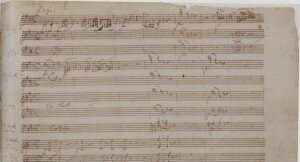 At that very same concert, Mozart also improvised on the piano, including a set of variations on the popular aria “Non più andrai” from The Marriage of Figaro. The evening was a huge success, and afterwards Mozart said he “counted this day as one of the happiest of his life.” We also know that Mozart made the acquaintance of the Prague impresario Pasquale Bondini, who commissioned Mozart to write an opera for the following year. Lorenzo Da Ponte, who became the librettists of Mozart’s opera Don Giovanni first performed in Prague wrote, “It is not easy to convey an adequate conception of the enthusiasm of the Bohemians for [Mozart’s] music. The pieces which were admired least of all in other countries were regarded by those people as things divine; and, more wonderful still, the great beauties which other nations discovered in the music of that rare genius only after many, many performances, were perfectly appreciated by the Bohemians on the very first evening.” It’s hardly surprising that Mozart visited Prague a total of five times!